“To be human is to engage in relationships with others and with the world.” Paulo Freire[1]

Recently I have been thinking about something I call “People First Politics”. I’m pretty excited about it.

People First Politics is a name I came up with, but the ideas behind it have a long and noble heritage. (You can read more about this here.) It is based in the notion that politics and the economy exist for the sake of people and their flourishing, not the other way around.

I use the term flourishing here to refer to situations that allow human beings to develop their full human potential.

Paulo Freire argues that humans are relational in nature. He writes, “To be human is to engage in relationships with others and with the world. It is to experience that world as an objective reality, independent of oneself, capable of being known. . .man’s separateness from and openness to the world distinguishes him as a being of relationships.”[2]

We are creatures of relationship.

As such, our vocation (our purpose and calling) is to create a world that further strengthens our relationship-building capacity. This entails creating a world that supports, among other things, care, compassion, respect, creativity, reason, and dialogue.

Thus, our political life must support these human capacities, too. This is necessary because politics are for the sake of people, not the other way around. Our politics must help us become more human together. That is the main idea behind People First Politics.

One: Our purpose is become fully human together.

There is a difference between being a human being biologically and being fully human. Becoming fully human is the process of humanization. We become fully human by developing all our positive human capacities like love, respect, compassion, creativity, and wisdom, to name a few. These capacities are especially important, first, because they allow us to continue to develop our potential. In addition, they also allow us to build greater creative and playful unities with everyone and everything around us.

Becoming fully human is our calling. And we must create private and public lives that help us become fully human.

Two: We can only become fully human together, and this necessitates dialogue.

Every person has a unique view of the world. Thus, if we are to pursue humanization, we must be willing to dialogue with everyone else committed to humanization. And no single human being represents all of humanity, and so we need each other to achieve humanization.

Three: There are people all along the political spectrum committed to People First Politics. They are our allies.

People approach politics differently because they see the world differently. There are some people who pursue dehumanization, which is mainly marked by control relationships. These people are not our allies, and we should not tolerate their words and actions.

On the other hand, there are people all along the political spectrum who are committed to humanization. They are our allies. So, the question is not whether people are Democrats or Republicans (or Marxists, socialists, conservatives, or libertarians, as another example). The question is whether they are committed to humanization and whether they are willing to work with other people to gain a clear idea of what humanization is. (Because no one has it all figured out yet.)

Pursuing humanization is hard work because no one knows exactly what being fully human looks like or how to get there. Because of this, we must consistently practice character habits that help us find our allies all along the political spectrum and develop humanizing relationships with them.

Five: Our political growth comes from listening to the marginalized.

One of the best ways to pursue humanization is to actively seek out and listen to people who suffer dehumanization and oppression in our current culture. They often have the best insight into how we can make our society a more humanizing place. 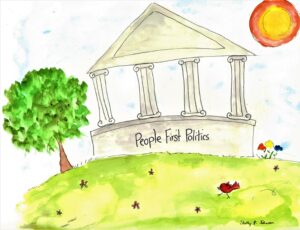 Six: The economy exists for the sake of people and their flourishing, not the other way around.

We should be willing to critically reflect on our biases about this issue.

We should be willing to critically reflect on our biases about this issue.

The Earth is our original parent, and humans can only flourish on a healthy, respected, thriving Earth. In addition, People First Politics recognizes that just as humans bring a unique good into the world, so does everything in nature. Humans and Nature are meant to exist in cooperation, not in relationships of domination and degradation.

We must be willing to acknowledge that we, ourselves, may unwittingly engage in such behavior. And we should also be open to the fact that people with whom we disagree may have things to teach us on this subject.

Ten: We are far more powerful and capable of beautiful things than we can ever imagine, and this calls for hope and courage.

Human history is marked by progress after progress. We have invented amazing things, cured horrible diseases, and made incredible humanitarian progress. We can do many more amazing things together. Hope and courage will get us there.

2 thoughts on “People First Politics: Something to Get Excited About”