I was discussing Plato’s Allegory of the Cave[1] in one of my classes last week.

This story, which I heard for the first time in college, is the story that made me eventually become a philosopher. I love it, and I think everyone should know about it. Here is the basic gist (with a few literary embellishments from me).

Note: The Allegory of the Cave was written by Plato in his book the Republic. However, Plato’s uses the figure of his real-life teacher Socrates as the main speaker throughout the book. So Socrates actually tells the story.

The Allegory of the Cave

There is a cave in the ground. And deep in the cave, you find a bunch of prisoners chained together facing a wall. They have lived this way since birth.

And behind the prisoners, far enough back that it doesn’t hurt them, there is a big bonfire that casts light and shadows onto the wall the prisoners face.

In front of the bonfire and behind the prisoners, there is a walking path. Day and night, the captors of the prisoners walk on this path carrying puppets or stick figures of things like horses, trees, jars, and pigs.

Then one day, Socrates tells us that someone releases one of the prisoners from his shackles and compels him to stand up and look around.

As you can imagine, this is disorienting for the prisoner. Although he sees something besides the shadows for the first time, he doesn’t comprehend what he beholds. And, in fact, his former shadows appear to him to be more real than what he currently sees.

Socrates tells us further that the prisoner is compelled to climb out of the cave. As you can imagine, because he has lived in a cave all his life, the light outside the cave feels excruciating. But slowly, the eyes of the former prisoner adjust to the light outside the cave. Eventually, illuminated by the sun, he sees things as they really are. And he understands he has been freed from the former realm of shadows.

The prisoner decides he is going to descend back into the cave to tell the other prisoners the good news about life outside the cave.

But as you can imagine, the prisoners who are still stuck in the cave think he is crazy and even dangerous. They try to make him come back.

Of course, having experienced life outside the cave, the former prisoner refuses to return to his old life in the cave. 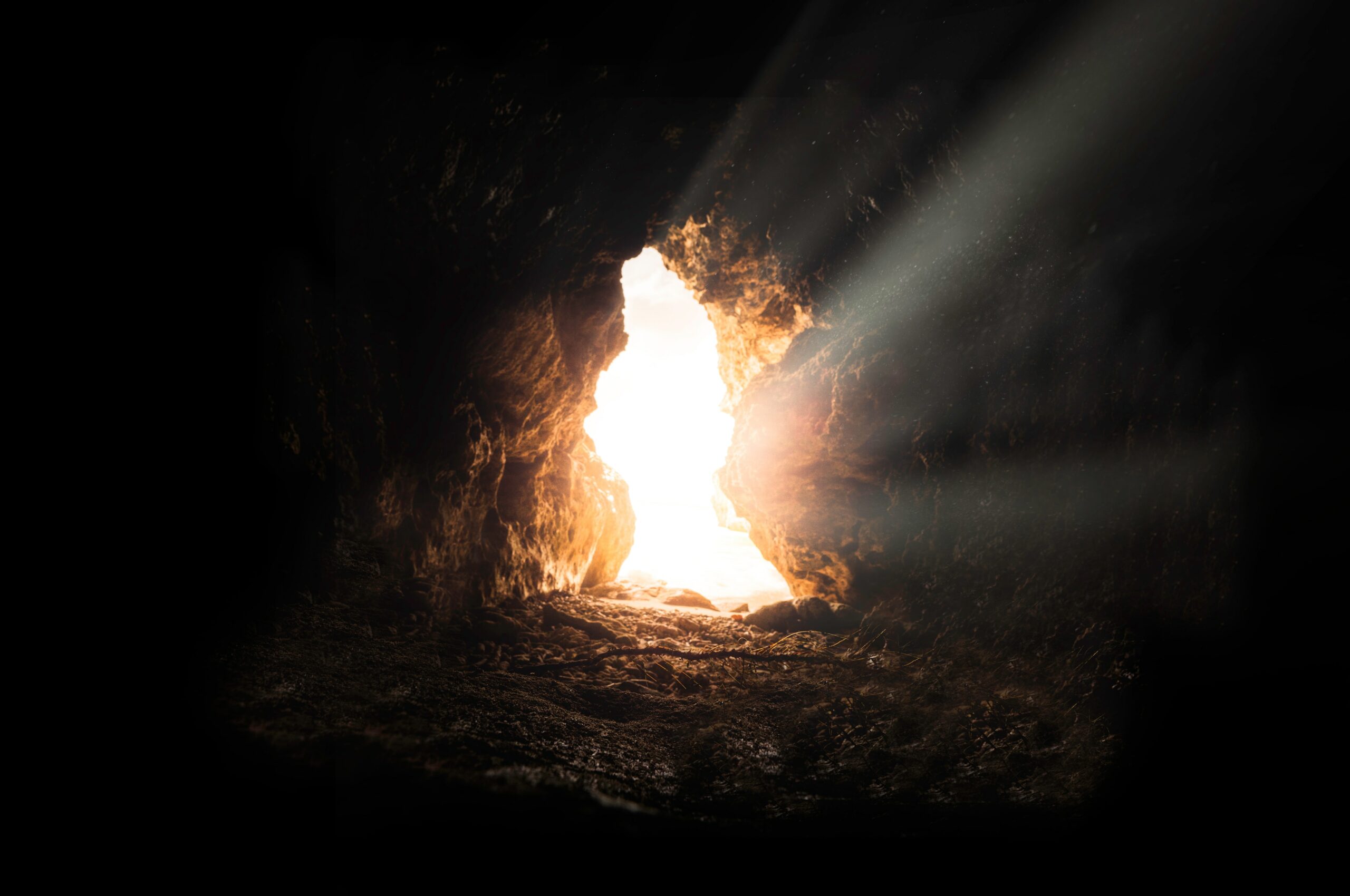 What Does Plato’s Cave Represent?

At the beginning of the story, Socrates suggests that his story is about the effects of education. Given this claim, it is likely that Socrates wants his audience to understand that all of us live in a metaphorical cave of some sort. That is because we have all experienced education of various kinds.

Now, Socrates isn’t against education. And in fact, he literally gave his life in the pursuit of wisdom and knowledge [2]. Nevertheless, Socrates told the cave allegory to help us understand that all of us have been taught, or are taught, wrong things, at one point or another. The teachers who teach such things may, in fact, teach them out of malicious intentions. Or these teachers may truly believe that they teach true things.

Nevertheless, Socrates argues elsewhere that true wisdom lies in the recognition that we don’t really know anything[3]. Such knowledge helps us be humble in our opinions and beliefs. And it helps  to be open-hearted, curious, courageous, and playful.[4]

However, it can be difficult to recognize truly how little we know and how prone we are to believe in shadows. And it can be even more difficult to maintain an attitude of curiosity, courage, and playfulness. Such an attitude requires us to move  out of our comfortable cave. And remember, moving out of the cave requires us to enter a realm that is wholly unfamiliar. It is a realm in which the light initially feels excruciating to our eyes and  mind.

This is the process of enlightenment. And enlightenment usually brings at least some, and often a lot, of discomfort. As my students said in class the other day, “Everyone likes the idea of enlightenment, but most people don’t want to actually become enlightened. That’s because enlightenment is painful, and we like to feel comfortable.”

As a result, it is easy for us to stay in our cave. As such, we get really good at naming the various shadows we see. We trade knowledge (really ignorance) about the shadows with our fellow prisoners. And when anyone tries to point out that we are talking about shadows, we feel threatened. And we call them crazy and dangerous.

If you are like me, you can think of a bunch of people you think should read this post. You are convinced they are stuck in a cave looking at shadows on the wall.

I understand this sentiment, but Socrates challenges me to realize that I am stuck in the cave, too. We all are. The only way we start moving out of the cave is to recognize how much we don’t know and to love truth more than we love comfortable shadows.

Philosophical Reflection: Here are some questions to ponder:

1. Socrates suggests that the wisest people are those who understand that they don’t really know anything. Think of someone you know who is humble about what they know but also seems very wise. Why is it that humility and wisdom often go hand-in-hand? On the other hand, think of someone you know who is arrogant but often acts unwisely. Why do arrogance and a lack of wisdom often go hand-in-hand?

2. Explain one time in your life that you were convinced something was true but then later realized you were wrong? How did this experience make you more humble about knowledge and curious about learning?

3. What are some ways that you could foster the virtues of humility, curious open-heartedness, courage, and playfulness? Who are some people in your life that encourage you to show these virtues?

4. Who are some people in your life that pressure you to accept what they believe is true and who also discourage virtues of humility, curiosity, courage, and playfulness? How can you start to minimize time around such people and spend more time around people who encourage the virtues mentioned above?

Philosophy in Action: Here is an activity to try:

Socrates loved to explore the nature of seemingly familiar concepts like justice, beauty, courage, truth, and the difference between opinion and justified true belief. Choose one of the terms on this list, or choose another term that interests you. Then, either through journaling by yourself or through discussion with a friend, try to come up with a specific definition of the term in questions. Here are some questions to help you:

a. What exactly is _________________? (truth, beauty, justice, etc.)
b. How do you know this? What is the evidence for your belief?
c. Why might someone disagree with your definition? What other definition might they propose? (For c. pretend that the person disagreeing with you is, like you, someone who cares about the truth. That is, try to think of someone who could have a legitimate disagreement with your definition–someone who would make you think.)
d. How would you reply to their disagreement?
e. If you feel really brave, find someone whom you know generally looks at the world differently than you do (but is open to discussion) and have the above conversation with them.

You can also follow me by hitting the Follow button at the right or bottom of the page.

And you might like this translation of the Republic: Plato’s Republic (Hackett Classic), translated by G.M.A. Grube.

This post is about how to detect propaganda in your own life. Propaganda is a tool people use to keep us in the cave. And the interesting thing about propaganda is that if we are the victims of it, it rarely ever feels like propaganda. This post can help you avoid being a victim: How to Detect Propaganda

[1] The Allegory of the Cave is in Book 7 of Plato’s famous book The Republic, which you can read online here.

[2] In the dialogues Apology and Crito, we learn that Socrates was condemned by the leaders of Athens for corrupting the youth of the city. In truth, he challenged everyone he met to seek truth rather than blindly accept dogma. The city leaders condemned him to lifelong exile or to death (his choice). Socrates said that he would not abandon his city that had nurtured him from his youth. And so, Socrates drank hemlock to carry out the sentence of death the city had passed on him.

[3] You can read Socrates’ discussion of this in Plato’s Apology.

[4] Socrates doesn’t use the words humble, open-hearted, courageous, and playful in his dialogue. These are intellectual virtues that especially interest me and that I wrote about in my dissertation, which was inspired (in part) by the Allegory of the Cave.

4 thoughts on “Are You in Plato’s Cave?”