The story of Jonah and the Whale is a fascinating story but not for the reasons people typically think.

People often think that the whale is the most surprising part of the story, but I believe it is Jonah’s anger and the path it takes him that is really fascinating.

At the beginning of the story, God tells Jonah to go to the Ninevites to tell them to turn from their wicked ways, or they would be destroyed. Jonah doesn’t want to go. The Ninevites, by all accounts, were a violent and brutal people. They were aggressive warriors who regularly raided and attacked cities around them and showed no mercy when they did so.

They were unrelenting enemies of Israel, and Jonah had probably lost quite a few friends and even family members to the Ninevites. It is understandable that he might not want to go and talk to such a people.[1]

But as the story goes on, we discover that the main reason Jonah didn’t want to go preach to the Ninevites was not because he feared the Ninevites themselves. Rather, Jonah feared that if he preached to them, they would have a change of heart, and God would spare them. 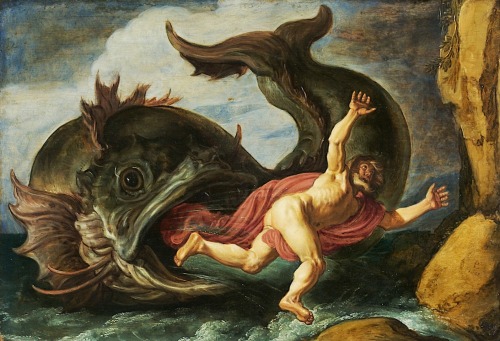 Jonah and the Whale, by Pieter Lastman

Jonah is a man full of rage, and his rage propels him into a dangerous path. Jonah hitches a ride out of town on a local shipping vessel. He hopes by sailing away, he can escape God’s loathsome call. As the story goes God sends a storm that that threatens to destroy the ship and everyone on board. Jonah quickly figures out that he is the cause of the storm and tells the men they must throw him overboard if they hope to survive.

This is an odd move. The story suggests that all Jonah had to do was agree with God to go to Nineveh, and the storm would have stopped. Apparently, in his anger, Jonah would rather perish than have to speak to those damned Ninevites. Jonah’s anger at this point has grown self-destructive.

When Jonah is thrown into the sea, a whale swallows him, and he spends three days and nights in the belly of the whale, stewing in his hate towards Nineveh. At the end of that time, he cries to God to help him, which God does. The whale vomits Jonah up onto the land, and Jonah finally goes and preaches to the Ninevites. Surprisingly, the Ninevites actually do repent of their violence, and God spares their lives. Jonah becomes abysmally depressed.

He sits under a shady tree in the hot sun, stewing in his rage over the fact that all of Nineveh did not perish in the fiery wrath of God. At one point, the tree withers, Jonah’s shade disappears, and that is the straw that breaks the camel’s back.

Jonah says, more or less, “God, you may as well just kill me now.” God responds, more or less, “Jonah, you are more concerned about your precious shade than you are about an entire city full of human beings, many of whom are so young that they can’t tell their right hand from their left.”

Eric Fromm characterizes Jonah as a man “with a strong sense of order and law, but without love.”[2] He adds that in Jonah’s “attempt to escape, he finds himself in the belly of a whale, symbolizing the state of isolation and imprisonment which his lack of love and solidarity has brought upon him.”[3]

When we are consumed with anger, it leads to all sorts of problems. Not only had Jonah’s rage lead him to pursue self-destruction, it had led him to the point where he cared more about his own fleeting comfort than he did about the destruction of an entire city of people. I think that in that moment, Jonah’s rage had turned him into that which he hated most in the Ninevites: a person who could sanction the destruction of an entire people without batting an eye.

It is pretty easy to point a finger at Jonah and his rage problems. But I think Jonah’s problem is a human problem we all have to deal with at one time or another. I know it is my problem. I have experienced a lot of political rage lately.

This election cycle seems like it brought out the worst in people and the dark side of America. As I have witnessed people making such hateful comments about minority groups and about their fellow Americans, I have felt profound anger. Of course, it is right to feel anger at these things, but sometimes I have become so consumed with a desire for justice that I have forgotten love. I have sometimes ceased viewing the people who do these things as people.

I may have not technically wanted them destroyed, but, at the very least, I wanted them shipped off to another country or planet. Whatever the case, I didn’t want to deal with those damned people anymore.

It is hard to know how to balance justice and love in situations when we are faced with people who do horrible things. How does one find love when it is so easy to hate? Something that has helped me recently is to recognize that all of us, no matter how evil and violent we are, share something in common.

Aristotle suggests that what is unique to humans is that we have language that allows us to discuss what is just and unjust and right and wrong[4] so that we can build a better world together.

And, in fact, we are all trying to build a better world. We all have the same goal, even though we often conceive of the ends in very different ways (and certainly some people have very bad ways of achieving this goal). It is this recognition of our shared essence that can enable us to adopt a disposition of love towards everyone. Even people who do terrible things.

Love, at its most basic level, doesn’t require that people do or be any special way. Love recognizes our shared essence. Love honors the image of God, Buddha nature, or whatever one calls it that even the worst person still possesses. Love wishes for people to flourish because the more we flourish, the stronger we are in our humanity.

Imagine a world in which everyone is reaching his or her full intellectual, emotional, physical, and spiritual capacities. Imagine the problems we could solve together. Imagine the beautiful things we could create together. Love recognizes this and wishes for the humanity in everyone to thrive.

Unfortunately, we often lack love in the way we approach one another. We focus on our differences and build defenses. We create the camps of “us and them”, and we grow increasingly enraged at the people who aren’t doing things the way we think they should.

We believe they are ruining our lives. We forget their humanity, and we begin hating and fighting each other. We want the people who are different from us destroyed, or, at the very least, shipped to a different country or planet. We want all justice and no love. We end up in the belly of the whale.

We think our anger, rage, and unmitigated demand for justice will better our lives. We fail to realize that this path threatens to lead to our own destruction. If our love is based on people doing what we want them to do, we will become increasingly angry, hostile, and full of rage as more and more people fail to meet our expectations.

In reality, even the people we love most fail to meet our expectations sometimes. Our anger can consume us so entirely that we no longer care about peoples’ well-being. We just want them out of our lives or even destroyed. Hate usually turns us into the very thing we hate. It certainly did for Jonah.

We all need to turn from our violent and evil ways, and we need to learn to love again. In my anger over this political season, I have been working hard to remember the shared humanity of everyone—even my enemies.

This doesn’t mean I won’t speak out against evil and violence. Remember, God called Jonah to speak against the violence of the Ninevites. I will demand justice. But, in my demands for justice, I will remember love and the spirit that is beautifully captured in a phrase spoken in certain yoga practices: The light in me honors the light in you.

[1] The story of Jonah and the Whale is in the book of Jonah in the Old Testament. My reading of the story is strongly influenced by Eric Fromm’s discussion of it in his book The Art of Loving.

1 thought on “Meditations from the Belly of the Whale”