Because of the recent impeachment inquiry against President Trump (you can read about these here), I wanted to refresh my understanding of impeachment. So I wrote this primer for myself and for anyone else it might help.

What is presidential impeachment?

According to the Constitution (Art. II, Sect. 4), presidential impeachment is a charge brought against the president of “treason, bribery, or other high crimes and misdemeanors”. 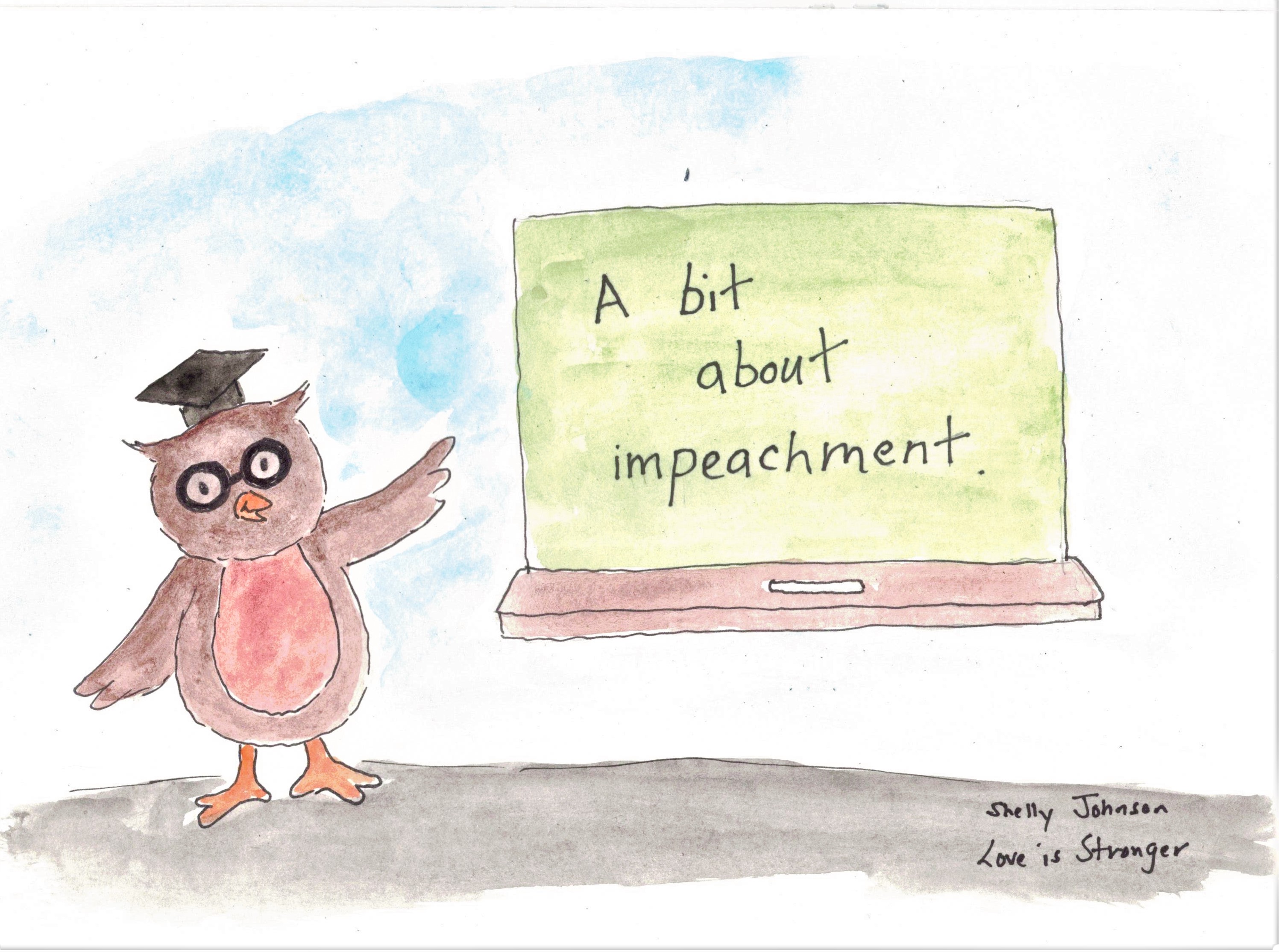 What specific crimes or actions can lead to impeachment?

The non-partisan Congressional Research Service notes that the Constitution allows for impeachment not only for criminal activity but also for “(1) improperly exceeding or abusing the powers of office; (2) behavior incompatible with the function and purpose of the office; (3) misusing the office for an improper purpose or for personal gain.”[1]

The Constitution (Art. I, Sect. 2) grants sole power of impeachment to the House of Representatives.

How does presidential impeachment work?

What does the Senate do about the Articles of Impeachment?

The Constitution (Art. 1, Sect. 3) states that “the Senate shall have sole Power to try all impeachments.” 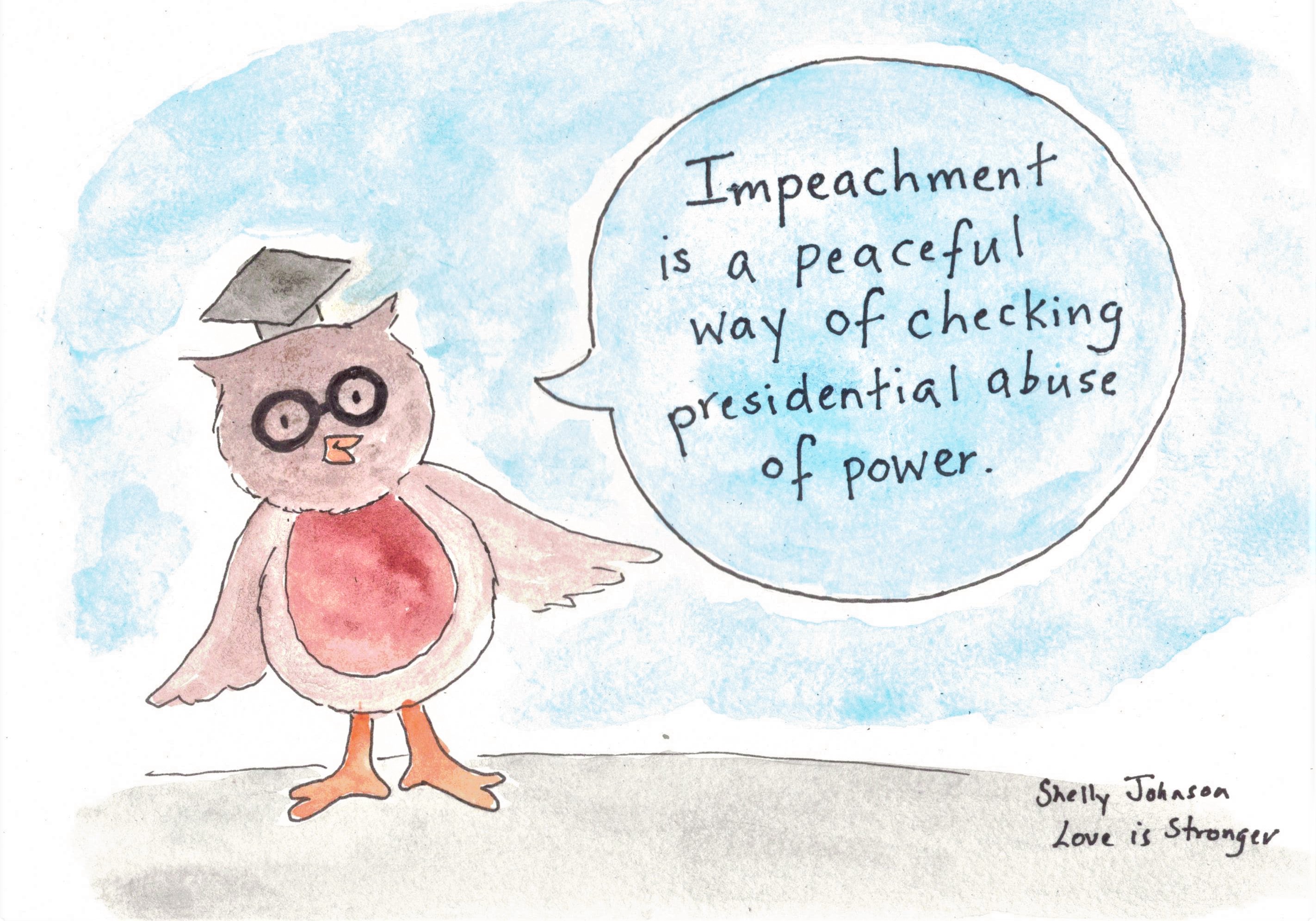 Why do we have impeachment?

The Founding Fathers believed that impeachment was a peaceful and necessary means of checking abuse of power in public office.

The writers of the Constitution were informed by the tradition of impeachment in English history. This tradition developed because of recurring struggles between English monarchs who wished to rule with absolute, unchecked power and the Parliament which believed that the power of monarchs must have some constraints.

Charles I believed in the Divine Right of Kings, a belief which very conveniently gave him the right to do, more or less, whatever he wished. Parliament disagreed with Charles I and attempted to constrain his power, which led to war. Eventually Charles was captured, tried, and executed for treason against England. You can read more about this here.

How Many U.S. Presidents have been impeached?

The United States has impeached (or has been in the process of impeaching) three presidents before President Trump.

One: Andrew Johnson became president after Abraham Lincoln was assassinated. He clashed repeatedly with Congress over his approach to Reconstruction. The House impeached Johnson, but he was acquitted in the Senate. You can read more about this here.

Two: The House was getting ready to impeach Nixon for improper behavior in the Watergate Scandal (a scandal involving election malfeasance), but Nixon resigned before they could impeach him. You can read more about this here.

Three: Bill Clinton was impeached by the House for perjury and obstruction of justice pertaining to his relationship with a White House intern. The Senate acquitted Clinton of the charges. You can read about this here.

Has a U.S. President ever been removed from office through impeachment and conviction?

Why is the House pursuing impeachment against President Trump?

A whistle blower in the intelligence community reported that during a call with the Ukrainian president Volodymyr Zelensky, Donald Trump pressured him to investigate Trump’s political rival, Joe Biden, in order to find information that would damage Biden’s presidential bid. You can read the full, declassified transcript of the whistle blower’s complaint here.

You can read a full transcript of the Trump-Zelensky call here.*

There is also concern that the President may have withheld funds from Ukraine in an attempt to pressure Ukraine to do him this favor.

The whistle blower presented his/her formal complaint to the inspector general who believed it “rose to the level of ‘urgent concern’”.[4]

Why do people believe Trump’s actions are impeachable?

Various constitutional and political experts (both Democratic and Republican) argue that Trump’s actions demonstrate a clear intent to use the office of president for personal gain, which is one of the actions that some constitutional researchers argue is impeachable (see question #2 above). You can read about one such former Republican (now Independent) political expert here. 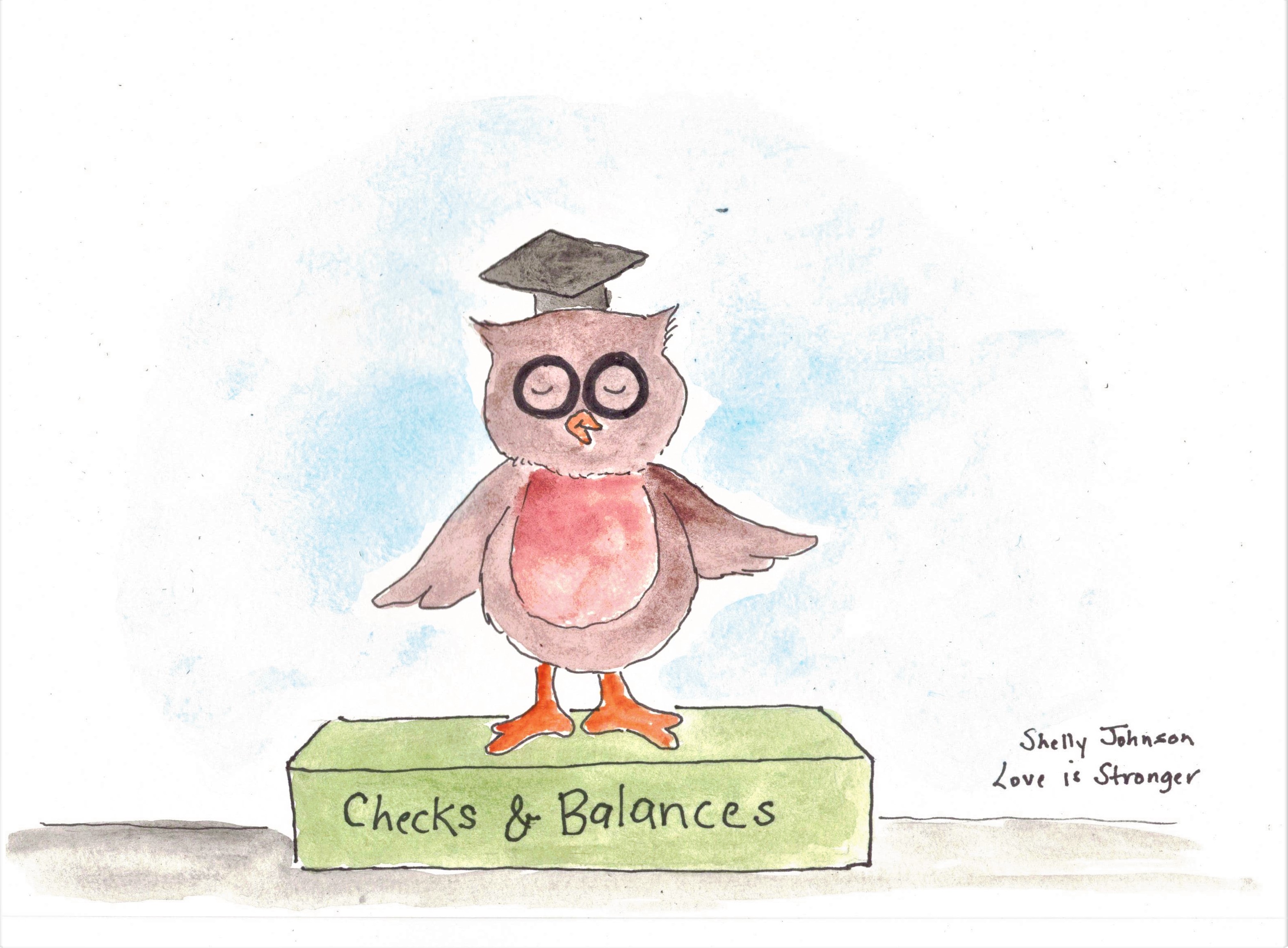 People in the U.S. intelligence agency are also concerned about Trump’s call with Ukraine’s president. In testimony today before the House, Joseph Maguire, the Director of National Intelligence (DNI), said that he believes the President’s call with the Ukrainian president is “unprecedented.”

He refrained from making a judgment about whether the President’s actions are impeachable, but he confirmed that the whistle blower had followed proper procedure and that he believed he had a duty to hand the information over to Congress. You can read more about his testimony here.

James Clapper, a former DNI and director of several key national organizations under the Clinton, Bush, and Obama administrations said of the whistle blower complaint, “I’ve seen a lot of whistle blower complaints during the time I was DNI, and this had to be the best composed, best written, best documented such complaint I’ve ever seen.” You can read more about this here.

Republicans in the Senate have largely remained silent on the issue, although this may be changing. Republican Senator Mitt Romney has openly been critical of the President’s phone call with the Ukrainian president, and it appears that several other Republican Senators are voicing concern as well. You can read more about this here and here.

Why do some people think impeachment is a bad idea?

The White House denies any wrongdoing by the President. Here is the official talking points on the Ukraine issue.

Some legal experts, such as White House lawyer Jay Sekulow, argue that because the President’s phone call with the Ukrainian president contained no specific quid pro quo (an exchange of favors), no wrongdoing occurred. You can read about that here.

Republican Senator Lindsey Graham has also suggested that the call shows no evidence of a quid pro quo and, therefore, is not a problem. You can read more about that here.

Some people believe that even if Trump misused his power, impeachment is a bad idea. They argue that if the President is impeached and then convicted and removed from office, his supporters will believe that he was removed through nefarious means, which could cause deeper and more serious rifts in our country. You can read more about this here .

How do people respond to these concerns?

Some legal experts point out that even if the President’s call did not contain a specific quid pro quo, it is still a serious abuse of power and warrants impeachment. You can read about this here.

Some people are also concerned that if these particular actions of the President are not impeachable, then nothing is, and it will be hard to check the power of any future president, Democratic or Republican. You can read more about this here.

Ben Franklin thought that the United States should “provide in the Constitution for the regular punishment of the executive, where his misconduct should deserve it, and for his honorable acquittal, where he should be unjustly accused.”[5] 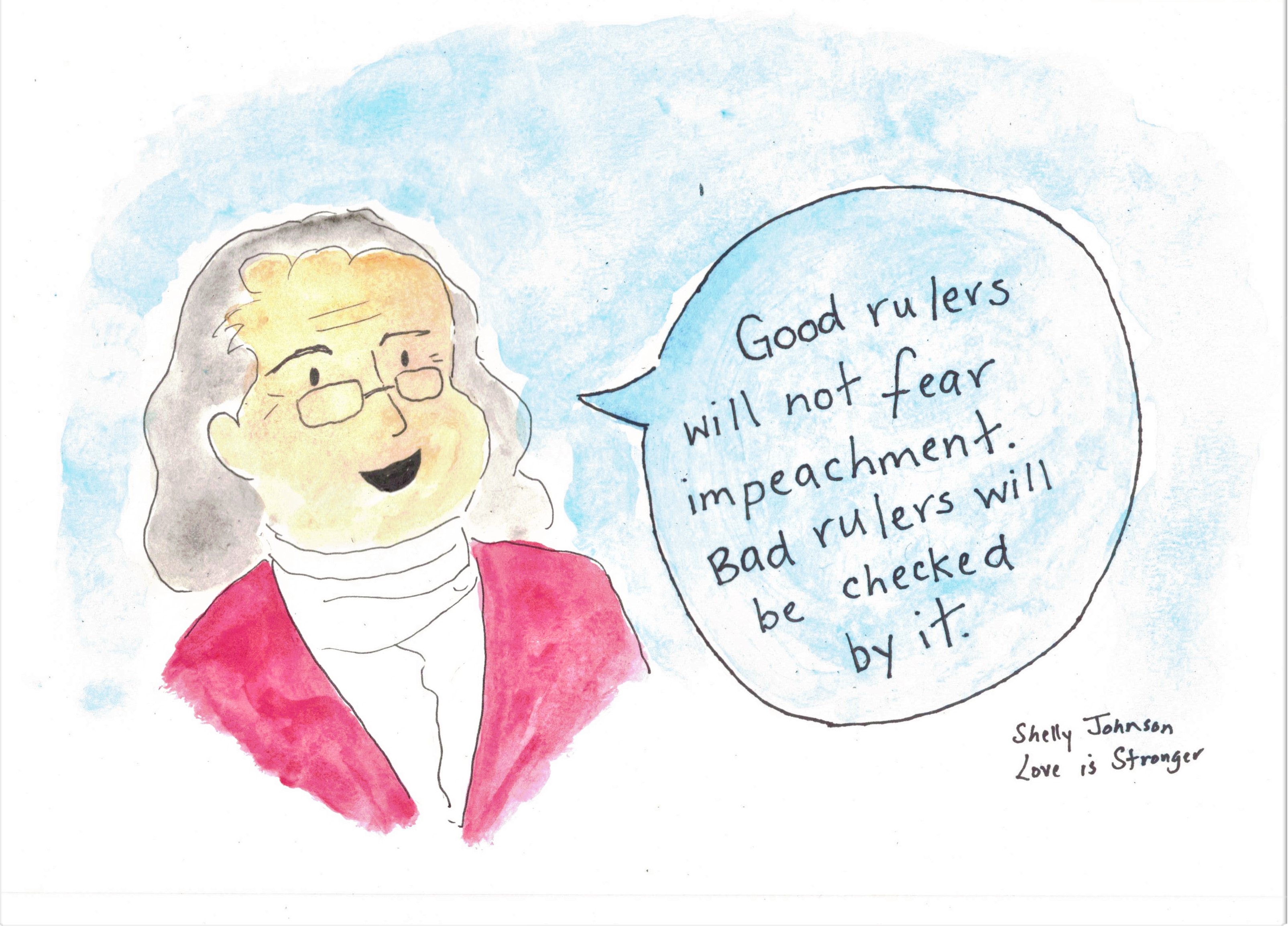 This is not a direct quote from Ben Franklin but represents the general view of impeachment held by many of the Founding Fathers.

Is the President Amoral? Does it Matter?

*Update: As noted in the article at this link,  this transcript is a “memorandum released by the Justice Department [and] is not, according to the administration, a verbatim transcript. The text, according to a footnote, is the record of the notes and recollections of the officers and National Security Council policy staff ‘assigned to listen and memorialize the conversation in written form’.” (Thanks to my friend, Jeff, whose pointed out this important distinction, which prompted me to update this post.)

[5] Lepore, Jill. (2017). How Impeachment Ended Up in the Constitution. The New Yorker. Retrieved from https://www.newyorker.com/news/news-desk/how-impeachment-ended-up-in-the-constitution