Do you have some friends who bring more magic and whimsy into your life?

AnneMarie and I grew up in the same circles, but we didn’t really become friends until we worked as counselors together at a camp in Oregon during college. I always loved AnneMarie’s style. She had lovely, long brown hair and wore this adorable, floppy hat. She had a big smile for everyone and played the guitar. I thought she was wonderful. 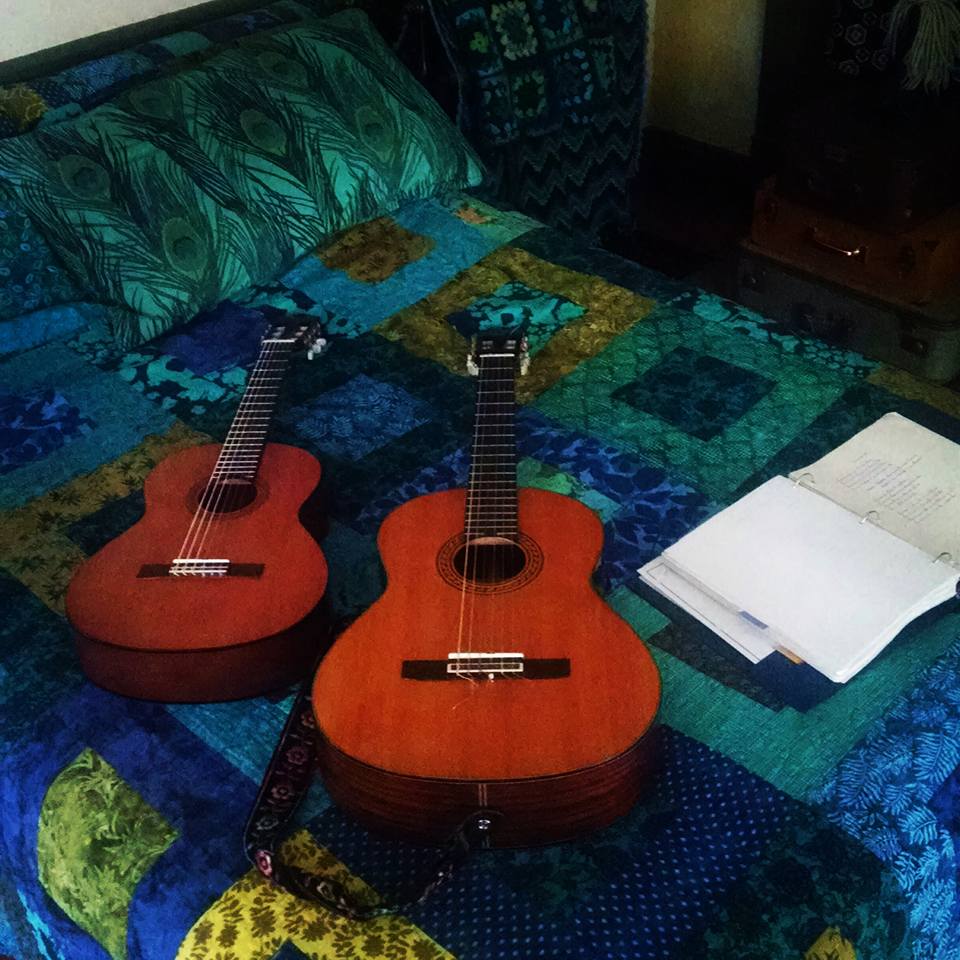 All of the pictures in this post are courtesy of AnneMarie and are of her art.

After that summer at camp, we lost touch for about twenty years until we reconnected on Facebook. We both realized we had an interest in authentic conversations, art, and hula hooping!

We began chatting over Facebook regularly, and now when I go to visit family in Oregon, AnneMarie and I  always make time to get coffee and chat in one of the local coffee shops. One time I even brought my travel hula hoop, and we met for tea in the evening and then hula hooped outside under the stars together. 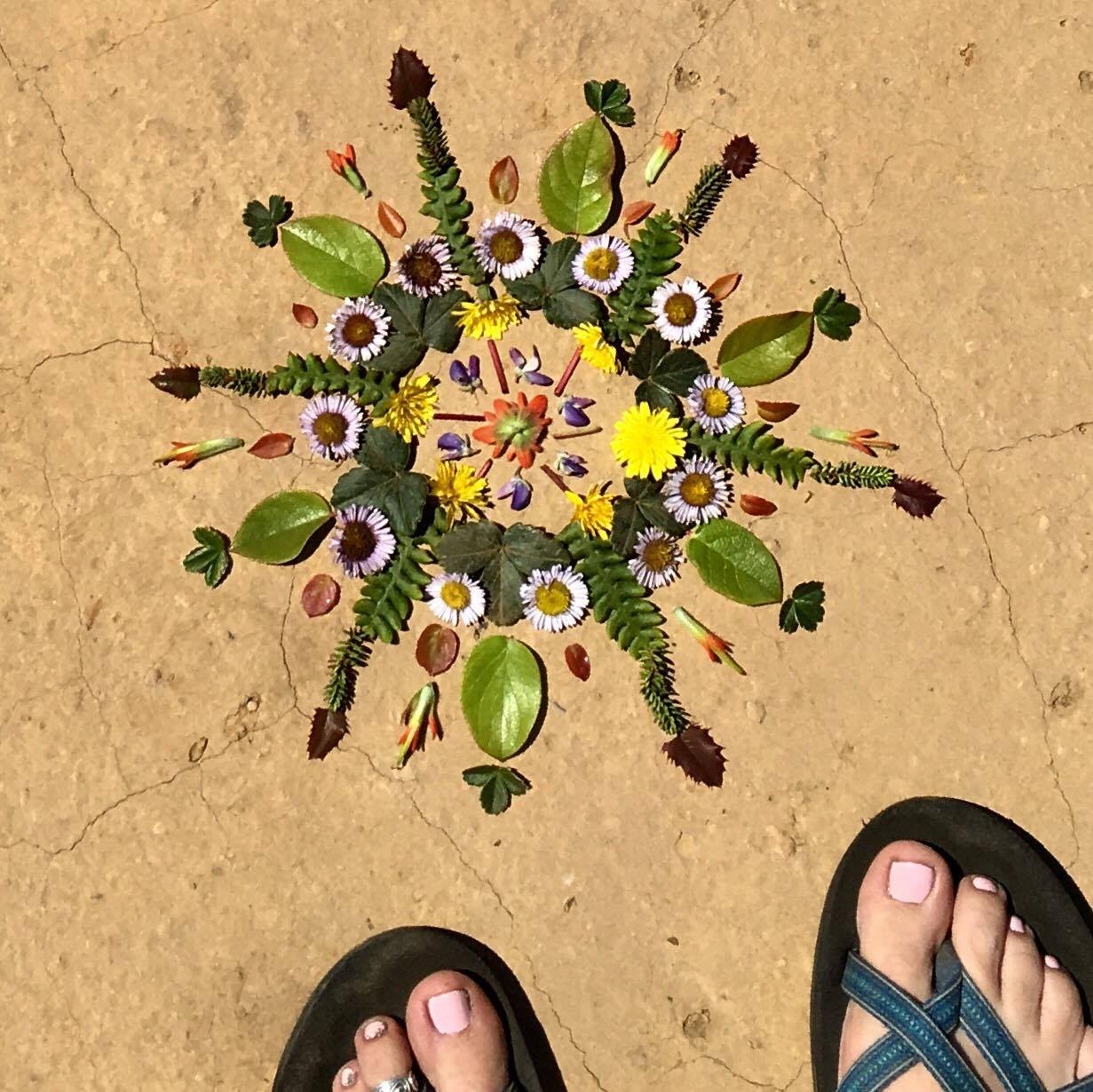 AnneMarie regularly sends me pictures like this of art she makes with nature. 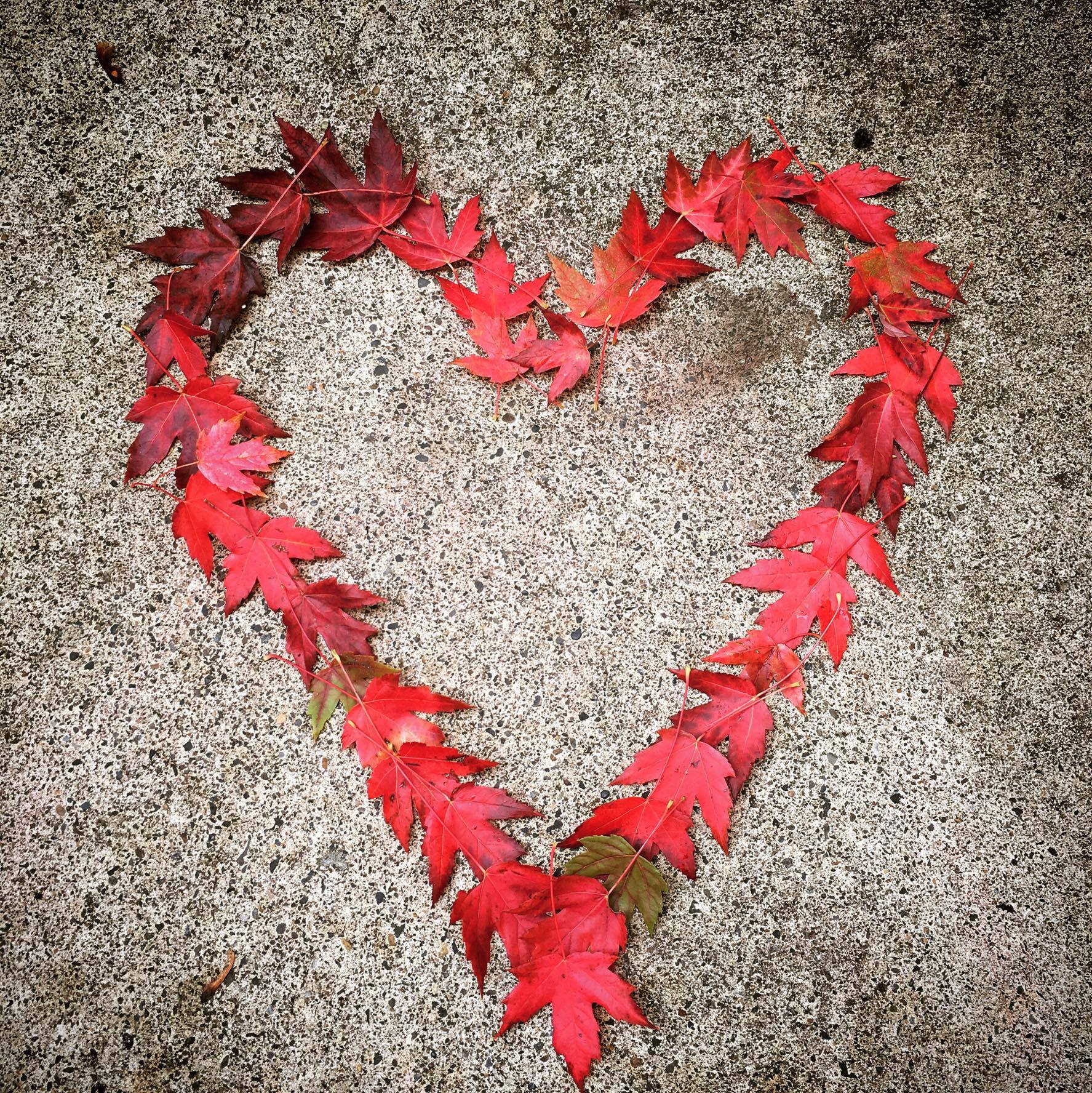 Here’s another one of her pictures.

Shortly after AnneMarie and I connected on FB, I began receiving magic in the mail. Sometimes it was unique postcard. Sometimes it was a charming letter with art doodles around the side. One time, she sent me a little box full of funky new pens to use in my art work. 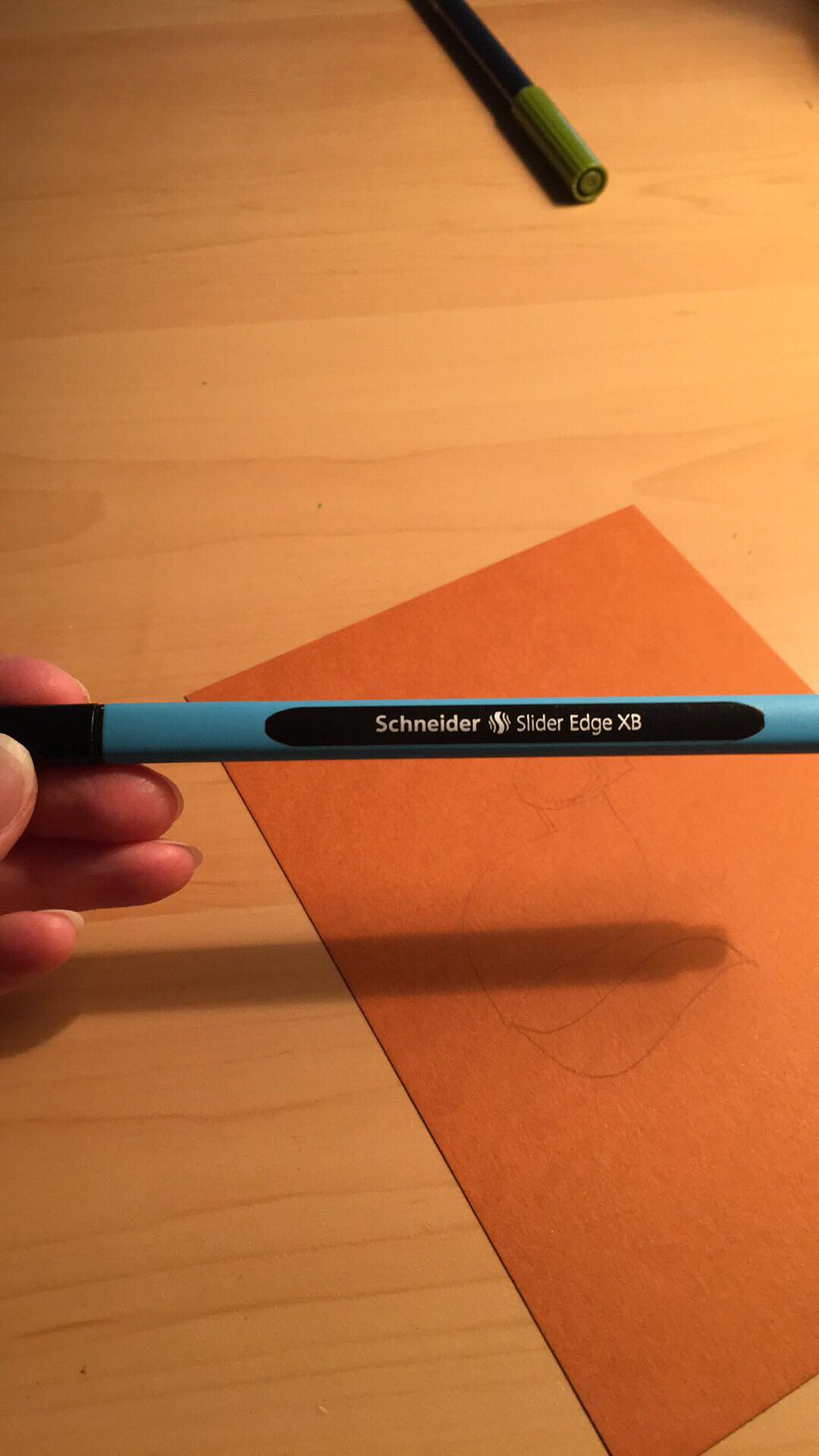 I loved these delightful missives, and I soon discovered that AnneMarie has a gift for this sort of thing. She regularly keeps up correspondence with a wide variety of people in her life. So, it was not surprising to me when I discovered that for National Letter Writing Month (April), she decide to write a letter to a friend each day and to decorate the envelopes.

Lucky for her Facebook friends, she also took pictures of her envelopes and posted them to Facebook each day. I loved seeing her artistic envelopes, and it inspired me to do an interview with her about her experience. 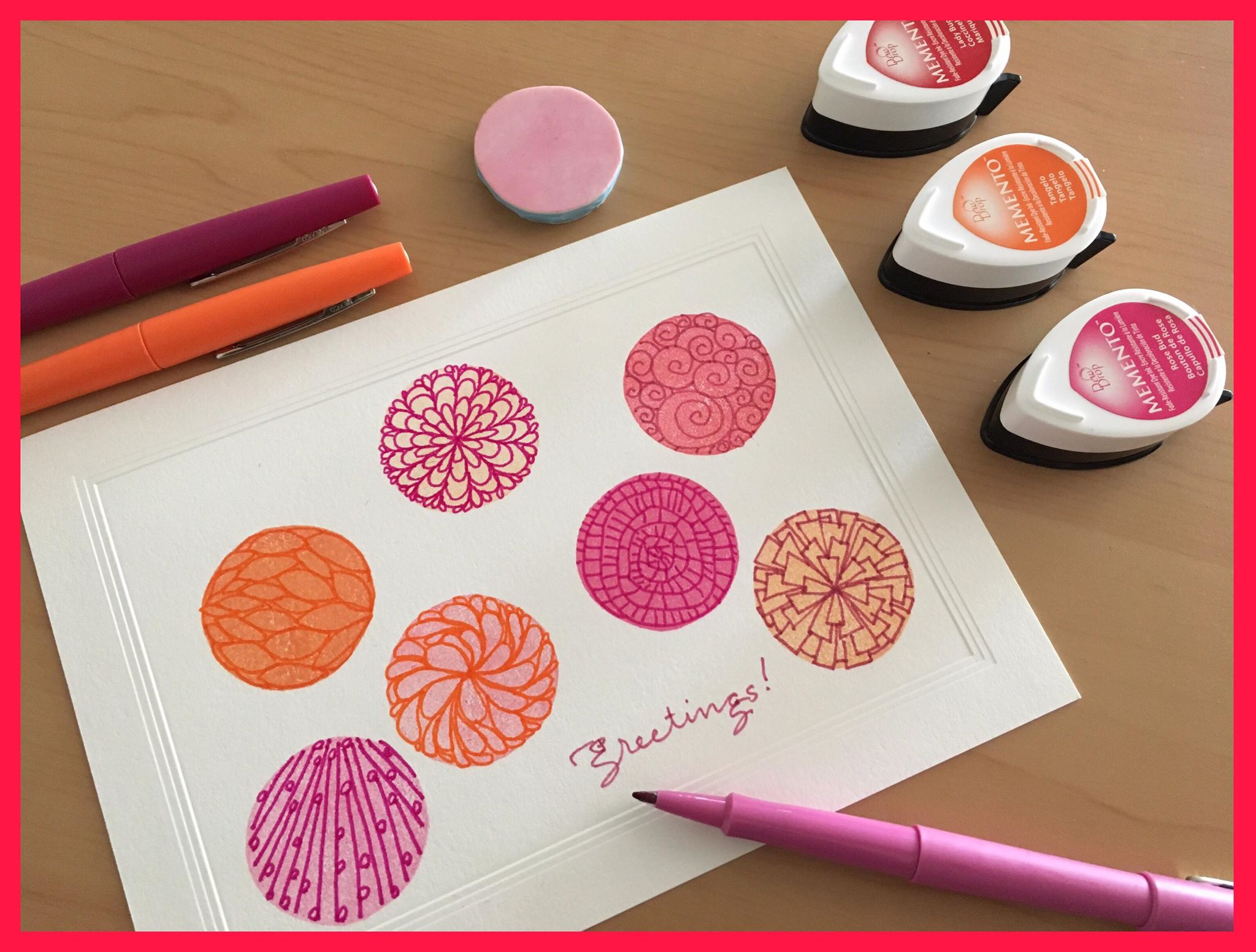 Shelly (S): What made you decide to write a letter each day this month?

AnneMarie (A): As a mom of a new little one, a few things happened right off the bat, one being that there’s so little time for my own pursuits. Another is an identity crisis: what about the things that make me “me?” Is it all just about keeping the baby alive and happy now? Before baby arrives, it doesn’t seem like such a big deal, but then in actuality it’s super hard to not have time to carve out for your own loves, especially after not having little ones around for many years. So, the letter writing challenge satisfies a few things:

a) it could involve art, my passion, and drawing in particular. But it would not take too long each day, as the envelopes are small. Each one could be different, allowing me to experiment with techniques and colors, etc. But on days I was shorter on time I could do something more familiar. I liked the flexibility of that.

b) The other major piece is that I really like people. And I don’t really stop liking them unless something really awful happens. So, if I am still in touch with friends from 40, 30, 20 years ago, I still write them occasionally. So this project gave me an excuse to do that: to spend time in appreciating my friends as I made something special for them, and to follow my heart each day as far as who the recipient would be.

c) I really truly feel that postal correspondence is an essential balance for all the digital communication in our lives, so it was a reason to up my game in that regard. 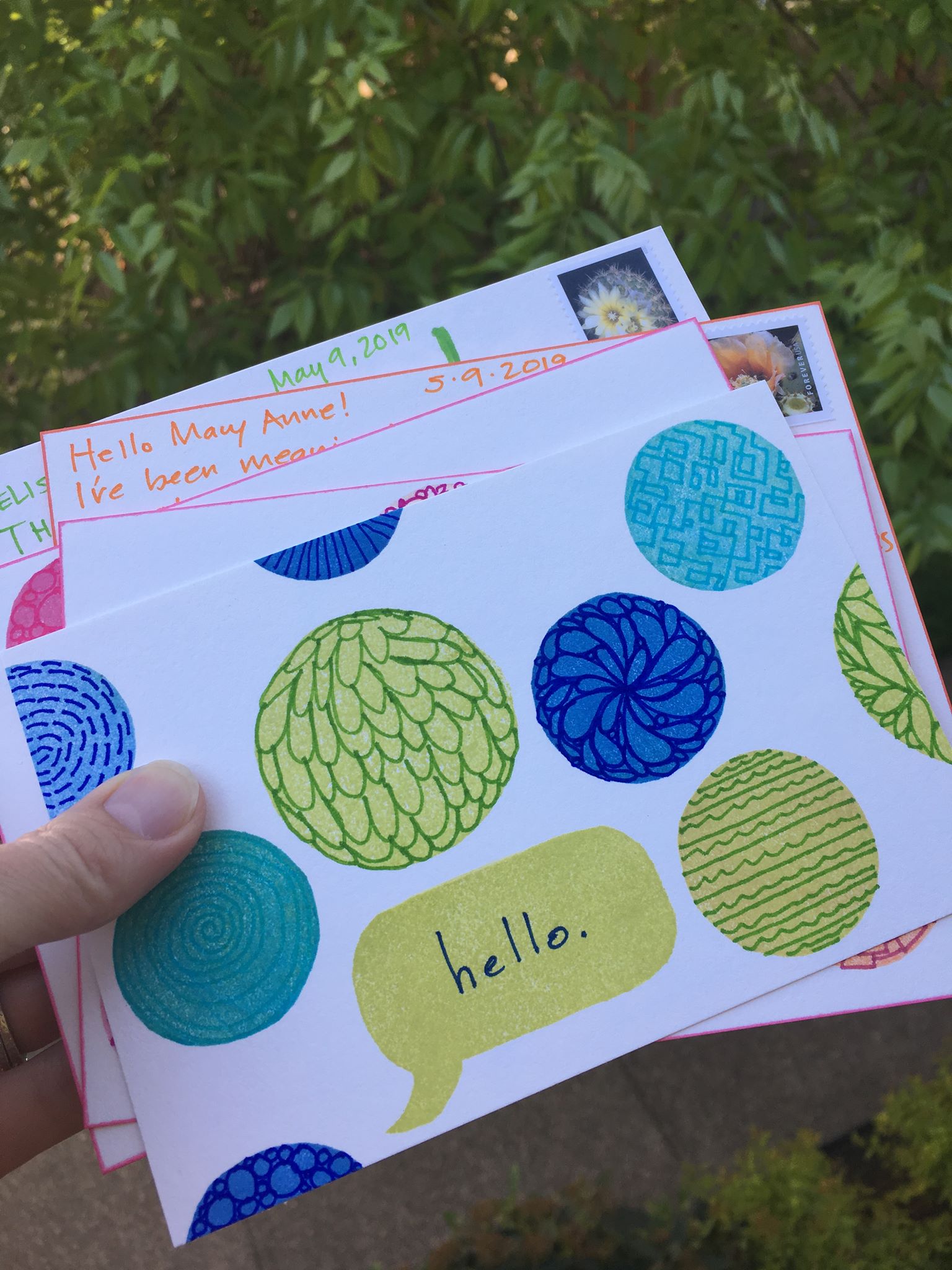 S: I know that you have been writing letters to pen pals for many years and that it is an important hobby to you. When did you start writing letters regularly to people? What are some things you enjoy the most about letter writing?

A: I should admit that I’m not actually great at letters, not for decades anyway. But I do like to write short notes to people. I also like to draw them something or include something fun like a hand drawn puzzle. But long letters stopped for me in probably high school. I focus more on the art of it than on the composition.

I don’t even remember when I began. Before I could even put anything in the post, I would write love notes or make drawings for my parents and deliver them under their door or on the kitchen counter. My mom and I have been going through old family papers and photos, and I’ve found crazy amounts of love notes for them, since about age 3. And as my circle of those I loved grew, I wrote to more and more people as I got older. My oldest “pen pal” is probably Mary Anne, my dear friend since 1985 or so (note from Shelly: Mary Anne is my friend, too, from seventh grade!). Though I think for me, a true pen pal is someone I’m not real-life pals with. In which case I’ve never really had an actual pen pal. Writing has always been just a way to enrich existing friendships, by cultivating affection and connection in a tangible way. 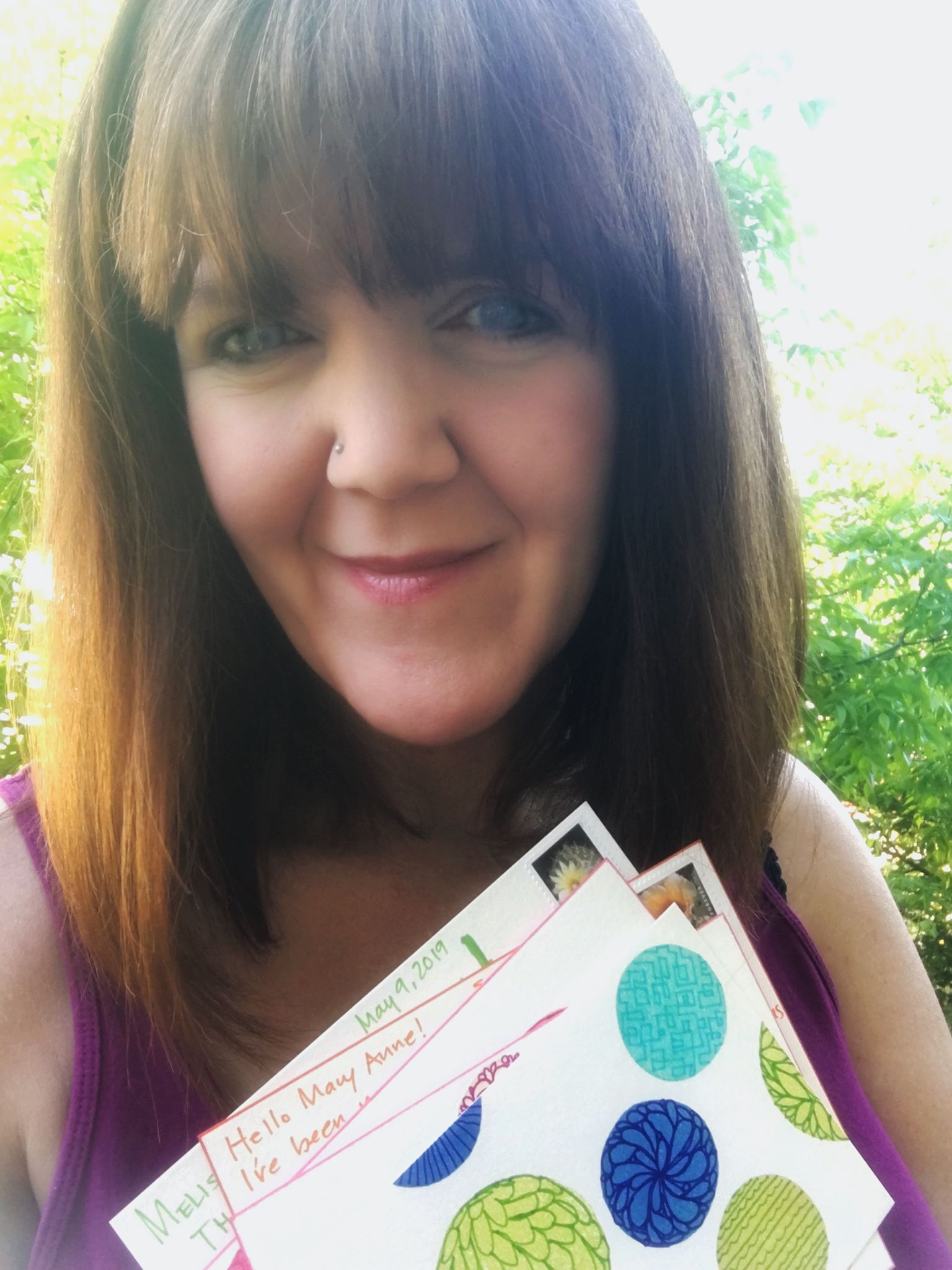 S: How many pen pals do you have? Or, who is a friend you have been writing letter to the longest?

A: There are about 7 folks who I’d say I’m unsurprised to get letters from. I have a box for the letters from each of my friends who right pretty regularly, and that’s about how many folks have their own box. And then I occasionally get surprise letters from folks who aren’t regular characters in my mailbox.

What do you think you learned from writing a letter each day this month? What is one thing you enjoyed the most about it?

The most exciting thing I learned was a love of a new technique, white fineliner paint pen on kraft paper. It was great to experiment until I stumbled on to a new effect I really love! So that was the new thing I learned art-wise. Correspondence-wise, I discovered some folks I hadn’t known were aficionados of snail mail, because I posted each letter on Facebook before I sent it.

So, seeing the devoted response from some folks really surprised me. I would not have known some of them would be appreciators if this project! I’d really wrestled with whether to do the simultaneous digital posting, so their responses made me glad I’d decided to go for it. 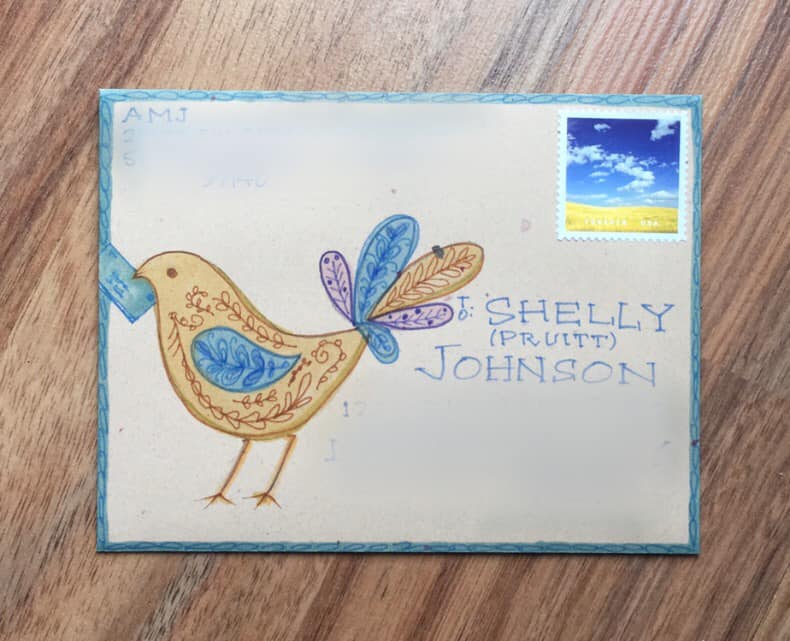 Another thing I learned is that there’s a lot of fine tuning I could do to my letters themselves. Good letter writing is so different than being a good conversationalist, because at the point of writing the letter it’s all one-sided, but you don’t really want it to come across as though it’s all about you, the writer. I’d like to hone my skills to where I am more adept at being others-focused, while honoring the fact that I don’t want them to feel beholden to me to write back.

S: Did you get any cool feedback from the people you wrote letters to?

A: It’s early in the response game, but I have gotten a couple letters back from folks. It’s wonderful to have that exchange completed when it does happen. One friend sent me a beautiful watercolored blue heron card made by someone she knows, since she knows I love herons. The other friend hand-watercolored a floral card to me. So they were both pretty special! Maybe I’ll get some other responses down the line. But I want all of my letters to be freely given, with no expectations for responses. I did get some responses from recipients just from Facebook-posting the picture of their letter. Folks are excited to be promised a letter, and I know the anticipation of finding something artistic in the mailbox along with the bills and ads is always a good thing, from what I hear, and from what I’ve experienced myself! 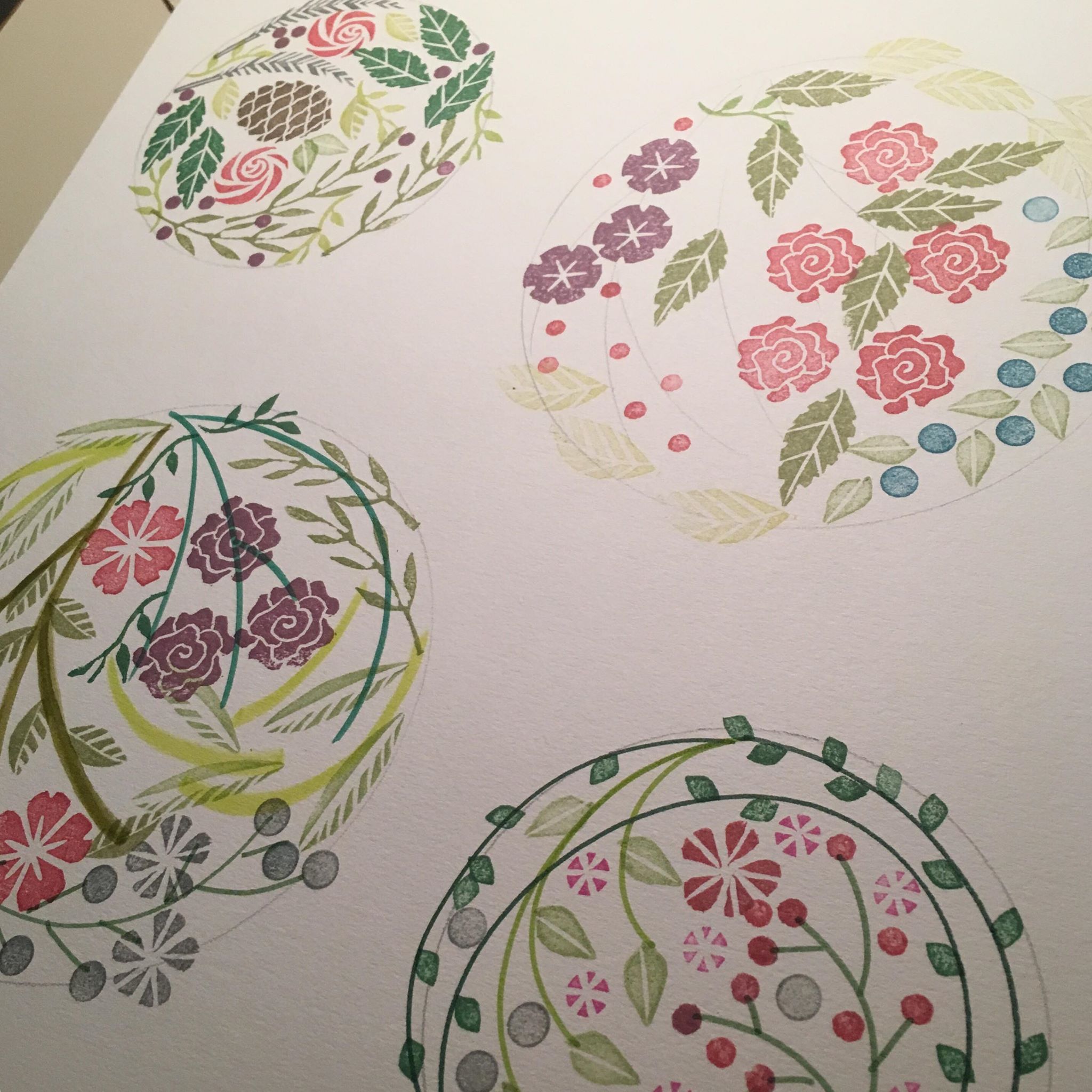 S: I know you strongly believe in the near “lost” art of letter writing. What are some of the benefits you think writing letters brings to the world?

A: There are a few things I think that letter writing offers the world. One is a connection with past generations, (or even past decades of our own experience >wink<), in experiencing what it’s like to have to slow down and wait for a response; and slow down and think carefully about one’s words as a writer. Letter writing helps us connect with, for example, what it could’ve possibly been like to be our grandmothers awaiting letters from our overseas grandfathers during the war. That’s something we can’t even fathom these days. But writing letters ourselves helps us possibly begin to imagine this.

A Concluding Note about Magic: If you read my blog, you will notice that I use the word magic a lot in it. That is because I believe that everyone has the ability to make magic in the world by practicing love, imagination, creativity, compassion, and wisdom. This is one of the things I love about AnneMarie’s letter writing. It is one of the ways she shares her magic with the world.

How do you like to express magic in your life? 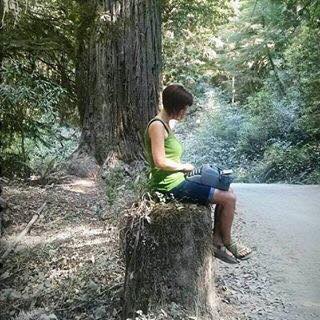 The Bunny and the Cardinal: A Whimsical Watercolor

On Mad Scientists, Identity, and the Ship of Theseus: A Philosophy Game with My Nephew

4 thoughts on “How One Woman is Reviving the Lost Art of Letter Writing: An Interview with My Friend AnneMarie”