The most terrifying book I ever read was a book at my sweet, little Quaker grandma’s house. I was about eleven, and one summer afternoon, I was browsing the library in her house.

I ran across a Reader’s Digest condense version of the Peter Benchley’s book Jaws. The picture at beginning was of a woman swimming through water and a massive shark beneath swimming up to chomp on the woman’s exposed belly. (If you look up the Wikipedia entry on Peter Benchley’s Jaws, you can find the picture. It still freaks me out, so I am not going to post it here.) 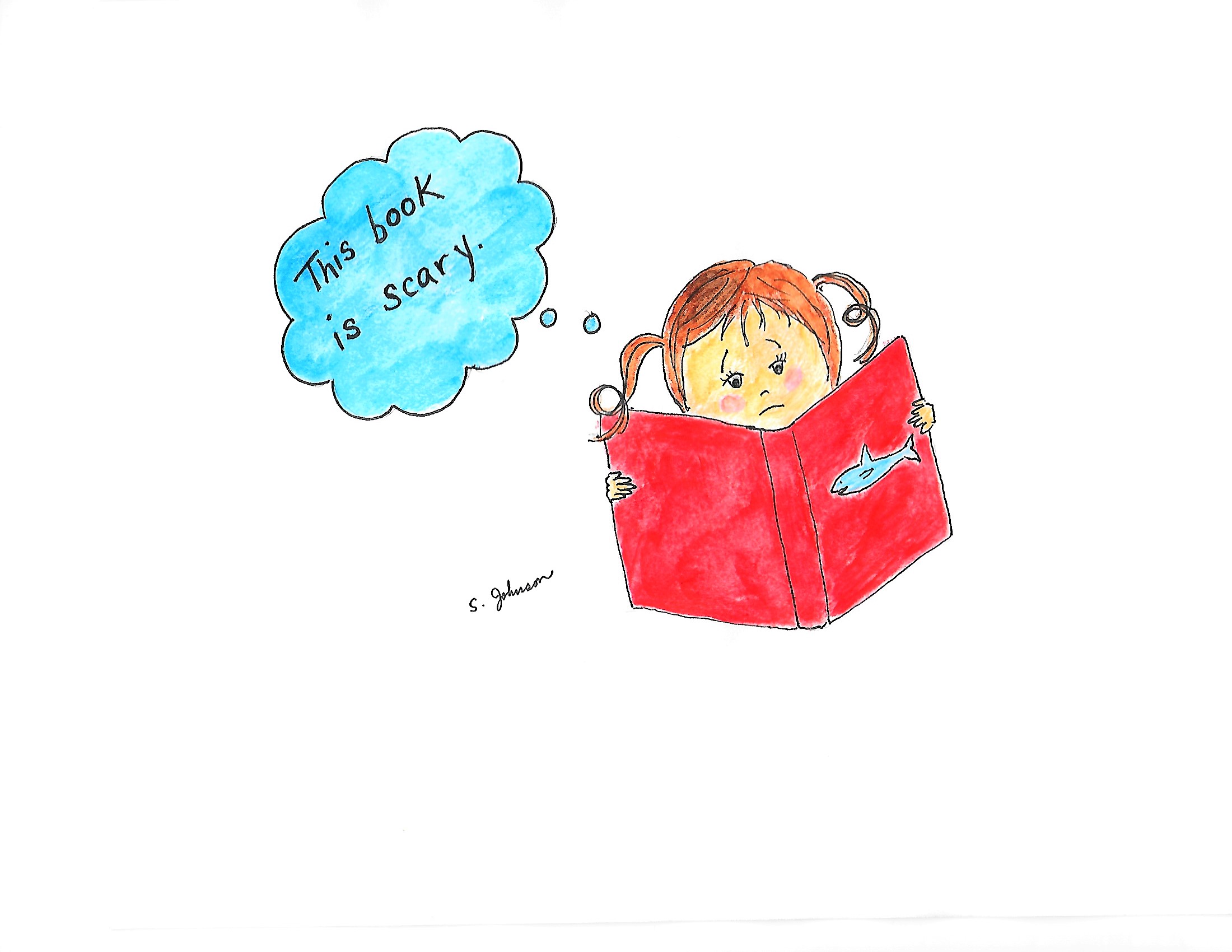 This picture terrified me. Even after I initially put the book down, I would soon return to stare at it with transfixed horror. It was like a siren that drew me against my will. I am pretty sure my grandma had that book in her library by accident, and she would have felt really bad that it scared me so much. 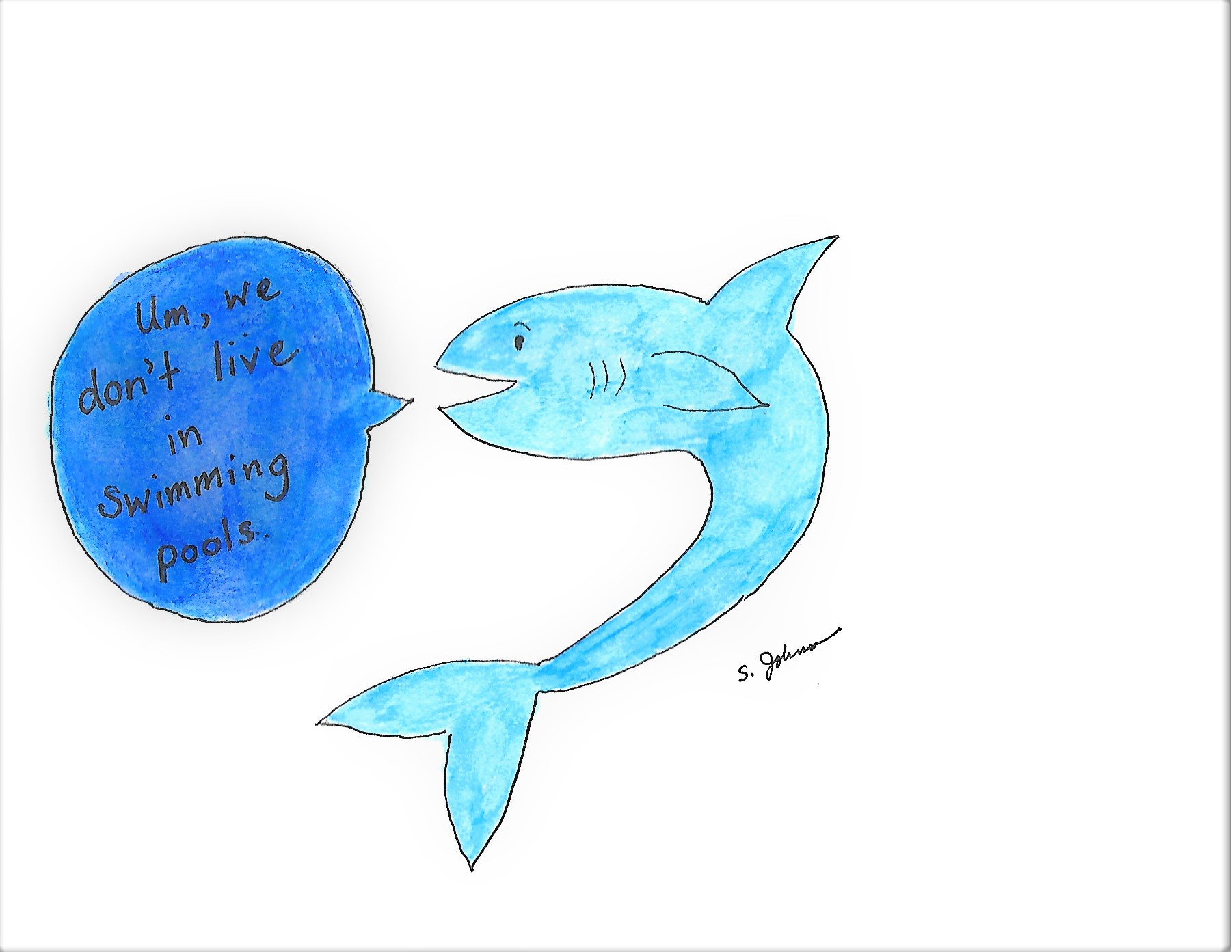 I loved swimming so much, and I was clear-headed enough, that I would realize that I was becoming terrified over something that could never happen—namely, a shark getting me in the swimming pool—and I would be able to talk myself out of my fear.

But my shark thinking actually lingered on into my young adult years. I was working at a summer camp in Oregon that had a big, beautiful lake in it. In the afternoon, the counselors would often swim out to the middle of the lake, and quite a few times, my old shark fear would hit me as I was swimming with them.

The old shark fears would temporarily block out fun with my friends; the beautiful scenery; and the cool, liquid grace of the lake water. Generally, I could turn my shark fears off and get back to enjoyment at hand, but sometimes my fear grabbed hold of me so completely I had to swim back prematurely to safety. 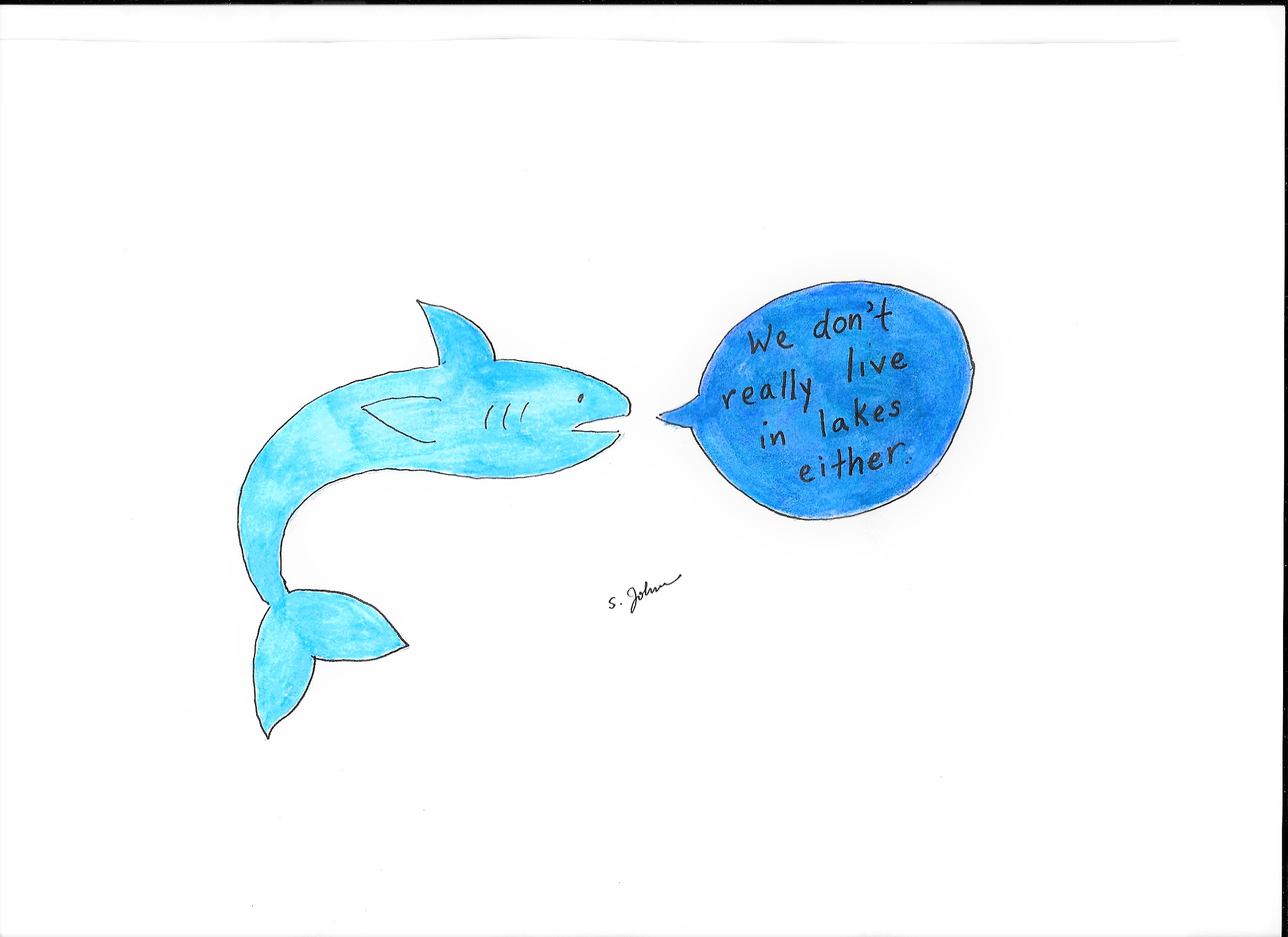 Shark thinking has invaded other parts of my life at times, too.  Many times through my life, I have become absorbed, or sometimes consumed, thinking about the worst possible scenarios that could happen in any situation.

In junior high, I was terrified that everyone was looking at me and criticizing me—never mind that everyone is almost always thinking about themselves, not me.

In high school I would worry about flunking tests, failing out of high school, and ruining my life. Never mind that I was a really conscientious student and studied all the time and earned good grades.

I found this shark thinking following me into my young adult life, and in a variety of situations, I would often focus on the absolute worse outcome that could happen in a situation. 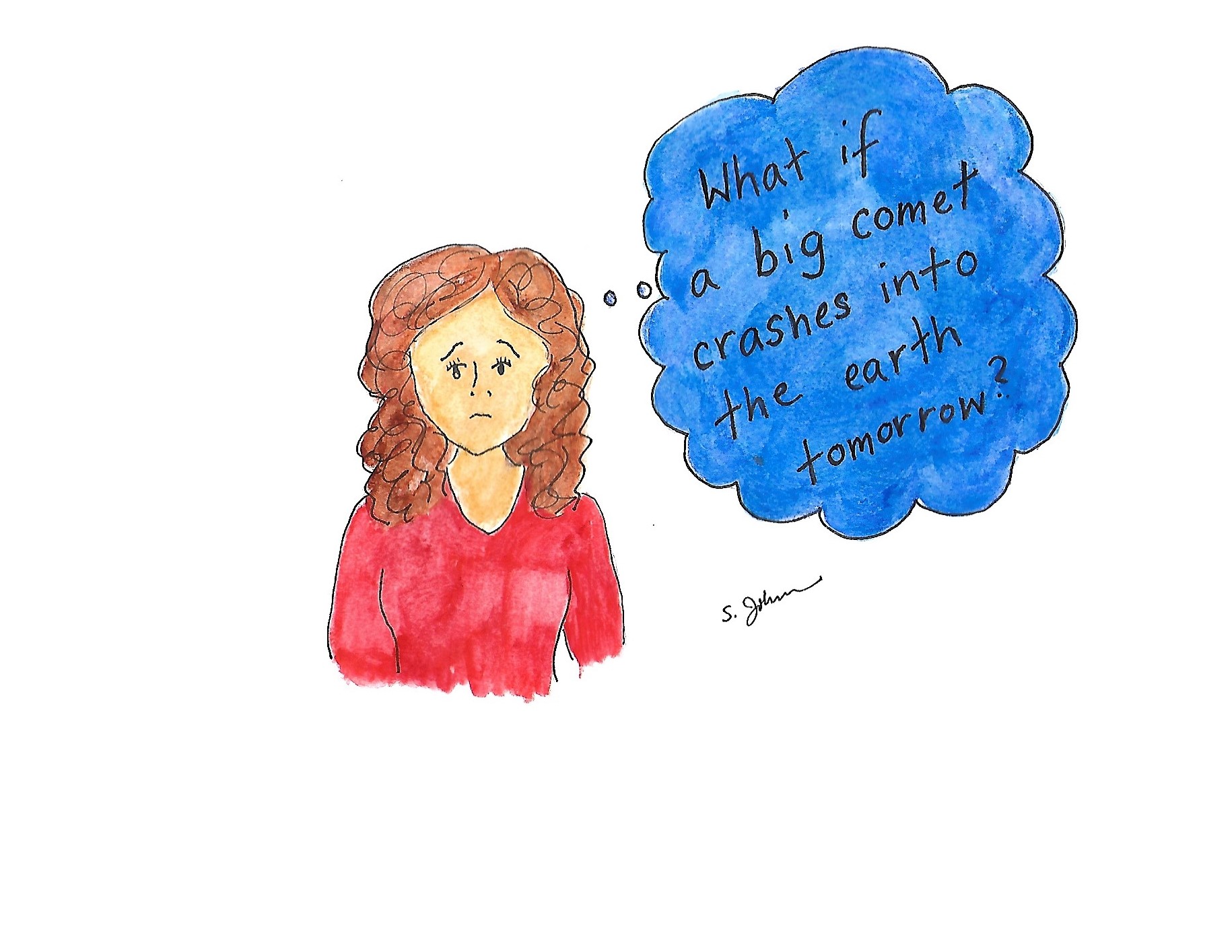 One day through a string of events, I suddenly thought, “Why do I automatically assume the worst? Why do I think everything is going to go badly all the time?”

I sort of knew the answer to this question. I somehow believed that by worrying about everything I would be more prepared, and I would be able to handle better all of the bad stuff that I worried would come my way.

During this time of my life when my mind was dominated by shark thinking, I believed any kind of positive thinking was a bunch of hooey. How does thinking positively help me? I wondered. How does it make me a better person and ward off all of the bad stuff?

However, as I began to reflect on my own thoughts, I began to wonder what good all of my anxious shark thinking actually brought me.

The more I thought about it, the more I realized that all my shark thinking did was cause me to work myself into an anxious stew—or give me an anxiety attack—and in the process of focusing on the worse possible scenario, I missed so many beautiful things around me.

I was so consumed with imagining the worst case scenario that I was often blind to the best case scenarios happening to me every day. I decide my shark thinking was lowering my quality of life.

Soon after this realization, I asked myself one day, What if I started assuming the best was going to happen? That everything was going to work out? That people were thinking good things about me? 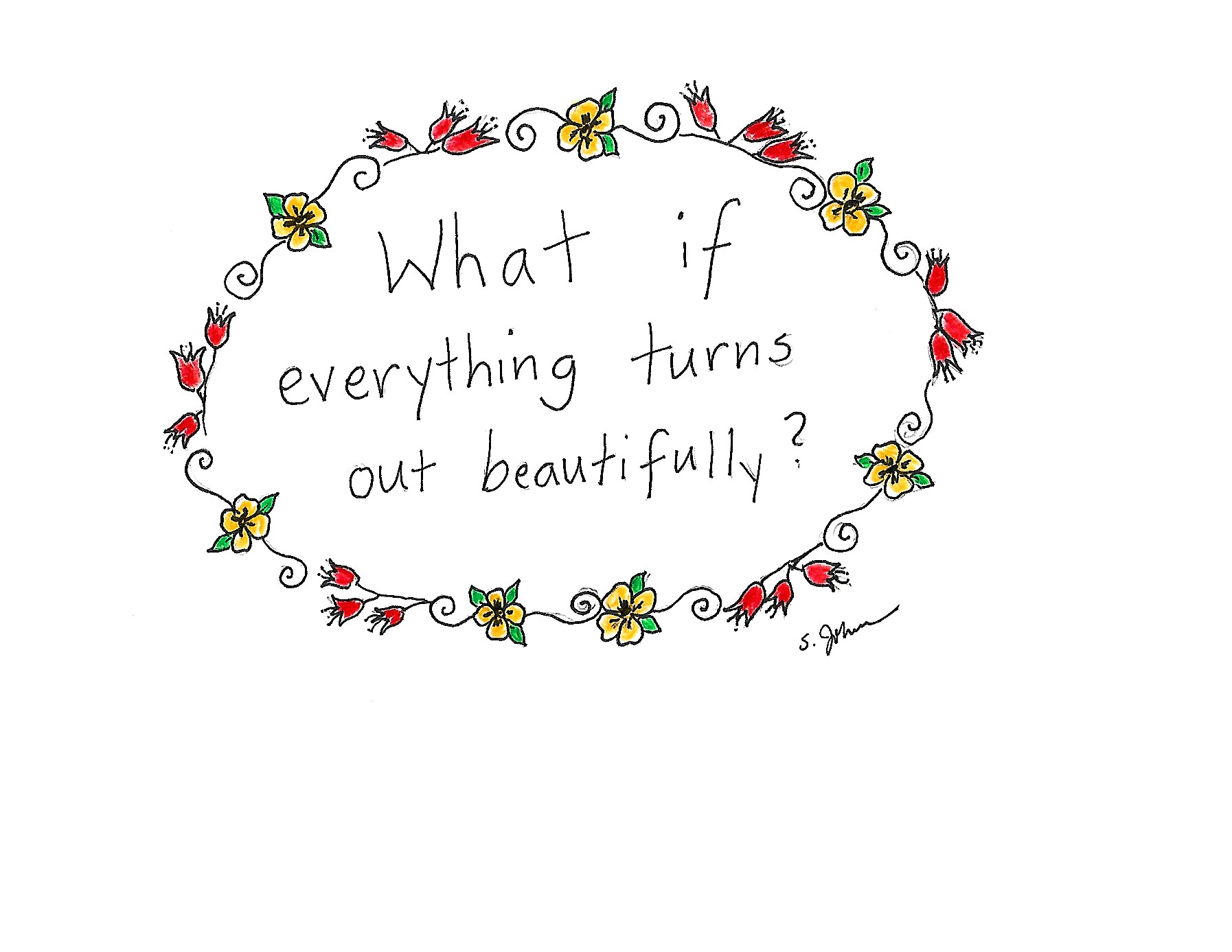 I consciously began showering myself with positive, beautiful thoughts that felt authentic to me and reflected what I thought was the best-case scenario. Here are some of my favorite thoughts I like to think:

I have everything I need today.

There is love all around me.

I have amazing friends who love me, and I love them.

This is going to be the best day of my life.

I have the wisdom and creativity I need to solve any problem that comes my way.

I think that some forms of positive thinking can foolish and delusional. Sometimes when I hear people talk about positive thinking, it seems like they are suggesting that there is nothing bad in the world, that we can’t get hurt, and that if we are doing things right, we never have any problems or difficult times in our lies. This kind of thinking is like pretending there are no sharks in the ocean or that they never hurt anyone.

That One Surfer Girl

A few years ago, I watched this interesting movie called Soul Surfer. This movie is based on the real life story of Bethany Hamilton, a young girl who lost her arm from a shark attack while she was surfing.

Bethany Hamilton lived the scenario I had dreaded in my worst moments of shark thinking, but what is amazing is how she handled it. She was certainly crushed after the shark attack and faced some really dark moments. She had been training to be a professional surfer, and after the shark attack, she feared she would never accomplish her dreams.

Amazingly, she learned how to surf with just one arm and became a professional surfer after all. I once watched an interview with her, and she talked about loving to surf and the beauty of the ocean. When the interviewer asked her if she was ever scared of a shark attacking her again, she replied that the shark that attacked her was a weird shark, and that sharks usually did not behave that way.

This interview amazed me. Here was this girl who could have been consumed by shark thinking, and no one would have blamed her at all. Instead, she focused on the beauty of the ocean, her love for surfing, and she was determined to do all she could to follow her dream of becoming a professional surfer. She focused on beauty, capability, and the moment she was in, instead of the terror of an unlikely shark attack.

When shark thinking dominates my life, I end up stranded on a rock, paralyzed by my fear of everything bad that can happen. I miss the beauty and potential right before my very eyes. When I practice loving thinking, I take life a moment at a time and constantly focus on the beautiful things that I have and the positive direction I want to go. This brings more beauty and goodness into my life. 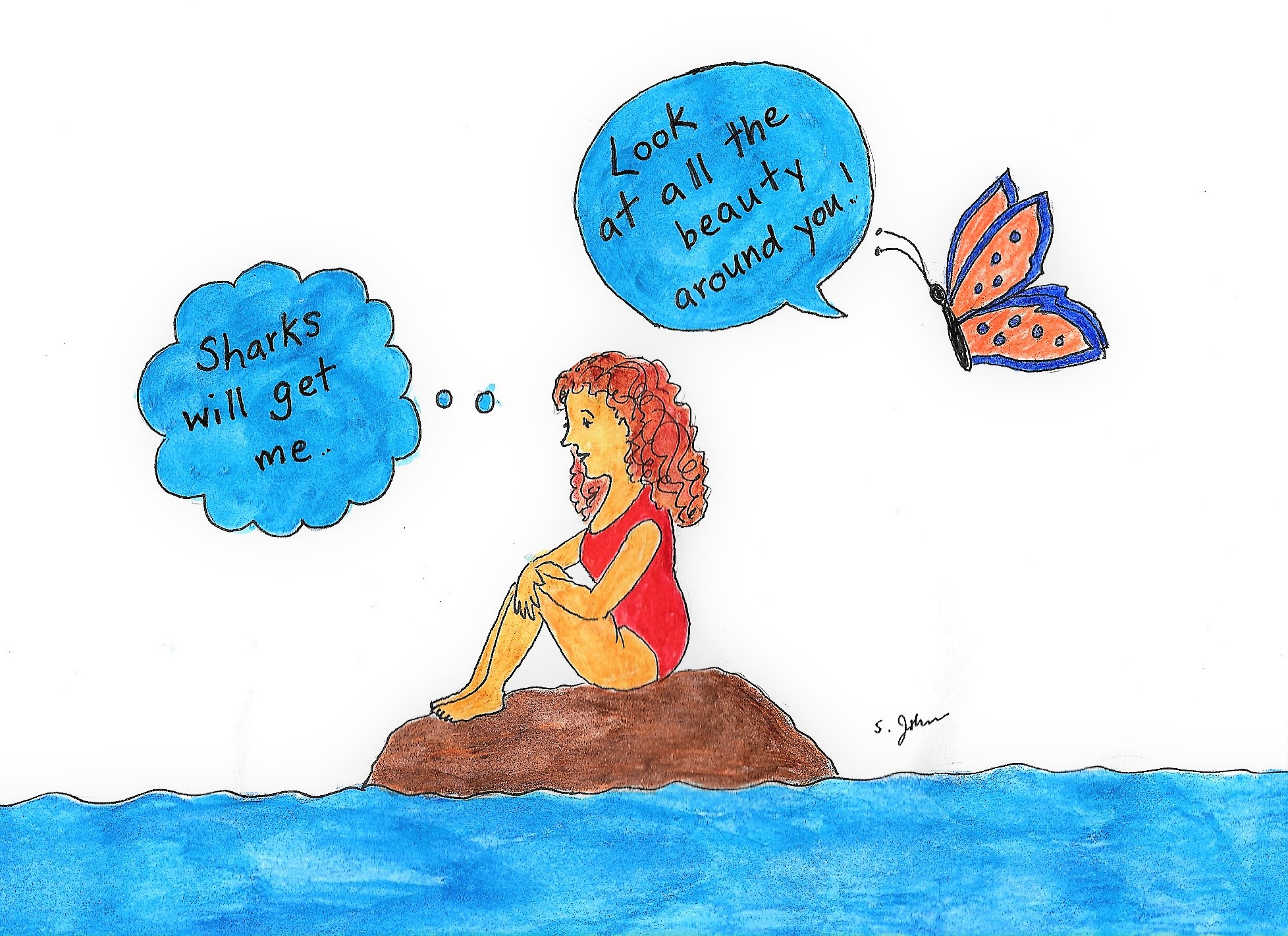 Does This Mean I Will Take Up Surfing?

I have always wanted to learn to surf, but in the past, my shark thinking has often kept me from seriously entertaining this option. To be honest, I am still a little terrified, but lately I have been thinking that I am going to do it. I may just surf in more shallow water, and I certainly know that there could be sharks, but I know I also have great courage, potential, and power. And I have decided that I will apply this same philosophy to all other areas of my life. No more shark thinking: I recognize there are bad and dangerous things in the world, but I focus primarily on the beauty and goodness all around me. This allows me to take loving steps forward and respond wisely and well to life. 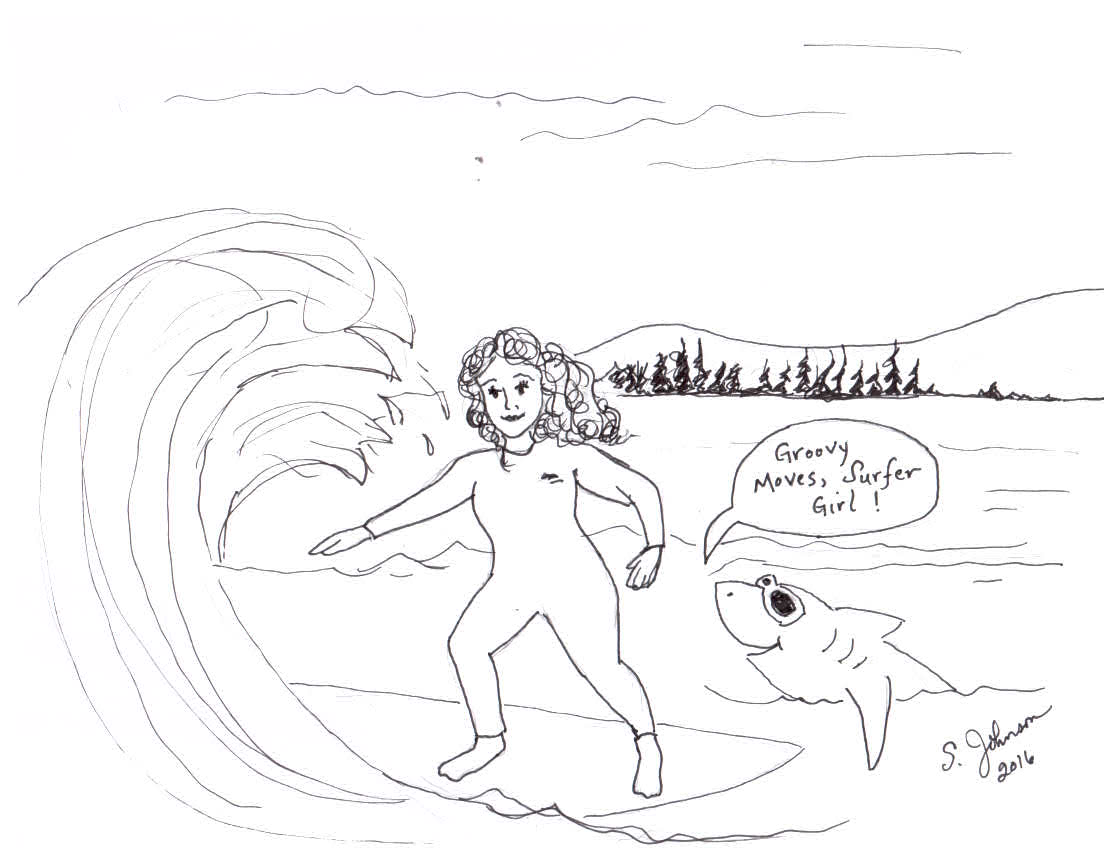 7 thoughts on “Some Stuff about Sharks, Letting Go of Fear, and Changing the Questions We Ask”