I have been wanting to write this post for a long time, and having just celebrated Father’s Day on Sunday, I realized that now is the time.

I want to write about the greatest gift my dad has given me. To tell you about this, I need to tell you a little bit about my job.

I try to convince everyone I can to take more philosophy classes—especially women. And there is a particular reason why: philosophy has a woman problem.

Philosophy is a male-dominated field, and there is a significant minority of professional female philosophers. In addition, while there are just as many if not more women as men in introductory level philosophy classes, and while they earn equally high if not higher grades than men, the more advanced the philosophy class, the more male-dominated the class is. And this is not because women cannot do philosophy. Women are awesome philosophers. (You can read more about philosophy’s woman problem here and here.)

I often think about why, as a woman, I have generally found philosophy hospitable. The other day I realized that one of the major reasons I feel at home in philosophy is because of Dad.

When I think of growing up, one of the things I remember most is all the conversations I have had with my dad.

I have told this story before, but when I was a baby and the Nixon and McGovern debates were on TV, Mom says that Dad watched the debates holding me on his lap. Throughout the entire debate, he discussed the politicians’ positions with me, carefully explaining their merits and demerits. Mom said I listened with rapt attention the whole time. 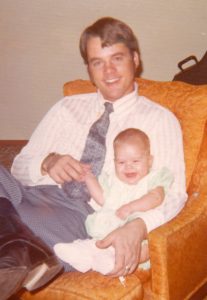 And this is pretty much how my relationship with Dad has been my whole life—one long dialogue, except the older I got, of course, the more I was able to join the dialogue. 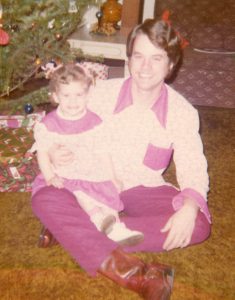 When I was in elementary and middle school, Dad would regularly ask me what I wanted to be when I grew up. And no matter what my answer was—singer, book illustrator, stewardess, writer—he would always listen seriously and talk through the various merits and demerits of the profession with me, encouraging me that I could be whatever I wanted to be.

When I became a teenager, I remember several activities I wanted to be a part of that Dad wasn’t totally on board with[1]. But rather than forbidding me to do these things, he sat down with me and discussed the merits and demerits of the activities; listened to my opinions; set some boundaries; and then left the final decision to me.

I got in about zero trouble as a teenager, and one of the reasons is because both my parents, but especially Dad, took this approach.

As I got older, it was very clear to me that my dad respected my opinion and me as a person.

He not only showed this in our interpersonal relationship but in our public interactions as well. When I was in high school, Dad was a pastor of a small church. My family is Quaker going back several generations, and Quakers have always viewed men and women as fully equal in the church setting (as well as the rest of life). Because of their firm commitment to gender equality, women have always played an active role in the church, and there have been many female Quaker ministers.

In fact, two of my great grandmas were Quaker ministers.

And in true Quaker spirit, Dad encouraged female leadership in the church he pastored, and I especially remember him encouraging my leadership.

When I was about fifteen or sixteen, our church decided to experiment with a small group structure on Sunday mornings to help people in the congregation get to know one another better. I remember getting excited about this format and telling Dad some ideas I had regarding it. He decided that I should organize and run the small groups. So, for about four or five Sundays in a row, I ran the small-group sessions, which basically consisted of me telling everyone in the church—men, women, teens, and children—what they should do and what they should discuss in their small groups.

And I guess you could say that I grew up just assuming people, men included, would consider my opinion important and listen to me. 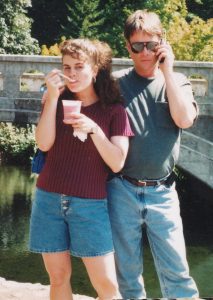 Now don’t get me wrong—I don’t think that I am more important than other people or that people should listen to me more than other people (except, I guess, in matters where I have a certain level of expertise.) Rather, I just grew up with the conviction that my opinion mattered; that I had important ideas to share with the world; and people—men, women, everyone–would want to hear them.

This has occasionally got me into trouble.

One time I was a director at a church camp, and a visiting church group was doing a work project during our staff summer training session. Some of the church folks in the group continually, although unintentionally probably, disrupted our staff meetings in the camp lodge common space.

I first tried to talk to one of the women in the group, hoping to resolve the situation, but she wasn’t interested in such endeavors. When I asked her where the pastor (who was leading the work group) was so that I could talk to him, she said, “It is not a woman’s place to tell a man what he should do about his business.”

Well, that made no sense to me, and in no way solved the current camp-church conflict we were experiencing. So, I marched out and found the pastor and, assuming he would want to hear my opinion, told him about the problem.

That meeting did not go well.

Even though I was the camp director, he seemed to believe that I should just follow along with his agenda, whether it made sense or not.

We disagreed on this matter.

We had to get a higher authority involved.

And that is not the only run-in I’ve had with pastors or Men-In-Charge-of-Stuff. Thankfully 9/10 pastors or male authority figures I have met are incredibly kind, gracious, and respectful. But the ones that aren’t also seem to believe that people, especially women, should do what they say, whether it makes sense or not, no questions asked.

And Dad taught me that is a bunch of baloney.

Dad taught me that everyone is equally deserving of respect and dignity.

Dad taught me that 9/10 times we can sit down and figure out a workable solution for everyone.

And I am forever grateful to him for that. 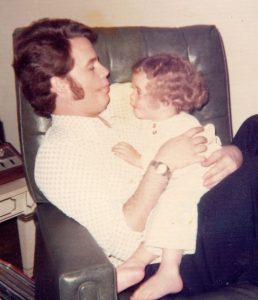 The greatest gift Dad gave to me is the gift of knowing that my opinion matters and that I deserve dignity and respect as a human being—that everyone does.

That’s why I am a philosopher and spend my day telling students my opinions about metaphysics and ethics and listening to their opinions. We have some awesome discussions.

That’s why I am so concerned about justice and believe we can find solutions to the current political and racial problems we are experiencing.

That’s one of the reasons I write this blog.

Thanks, Dad. I will always love you.

[1] Read: Hanging out with some guys, going to some parties.

6 thoughts on “The Greatest Gift My Dad Gave Me”