There is a weird story in the Old Testament about Balaam and his ass. It has always fascinated me.[1]

We don’t know a lot about Balaam. It appears that he was some kind of prophet who lived near the Euphrates River and had some kind of meaningful connection to God. Or at least people thought he did.

Apparently, he had enough of a reputation as an “Influencer” that a nearby king, King Balaak, tried to get Balaam to influence God for him.

You see, the Israelites had been wandering in the desert after God had delivered them from slavery in Egypt. God had promised the Israelites a new home flowing with milk and honey, but they had a heck of a time making their way there.

They had to travel through the lands of various groups and tribes who were often violent in general and hostile to the Israelites specifically. People frequently threatened the Israelites just for passing through their land peacefully.

One such tribe was the Moabites who became very unhappy when they heard the Israelites were passing through. Their King, Balaak, felt so threatened by the Israelites that he sent men to the prophet Balaam. King Balaak wanted to see if his men could entice Balaam, with money and promises of power, to curse the Israelites for him.

Here’s where things start to get weird.

When King Balaaks’s men visit Balaam and ask him to curse God’s people, Balaam tells them to stay for the night, so he can ask God what he should do. God visits Balaam in a dream and says, “Do not go with them. You must not put a curse on those people, because they are blessed.”[2]

That dream probably should have put matters to rest. And indeed, Balaam tells King Balaak’s men “No can do” the next day. So they return to King Balaak who apparently was quite desperate and sent fancier and more official men. They told Balaam, in essence, “We will pay you any amount of money you want and do anything you want, if you will just put a curse on the Israelites.” 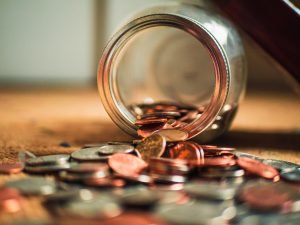 It seems this offer tempted Balaam. He once again instructed the men to stay the night so that he could ask God what to do, although God had made this pretty clear before.

Here’s where things get weirder.

God apparently appears to Balaam in a dream and says, ““Since these men have come to summon you, go with them, but do only what I tell you.”[3]

So Balaam heads out with the men the next day, but God gets angry with him for going. This suggests that either Balaam told himself that God had given him permission to go (and God really hadn’t) or that Balaam had bad motivations in going—to curse the Israelites and get rich doing so.

And this is where Balaam’s ass enters the picture.

Balaam was riding an ass (a donkey) on his way to seek King Balaak. The story goes that because God was angry, he sent an angel to stand in the road on which Balaam was traveling.

He didn’t see the angel, but the donkey did and refused to go any further on the path. Balaam got really upset and started beating the ass. He wasn’t going to let some ass stand in the way of his money.

And then the weirdest part of the story occurs. God grants the donkey the ability to speak, and the donkey says, more or less, “Why are you doing this to me? I am your faithful donkey and don’t usually act this way. Maybe there is something wrong and you should pay attention.” 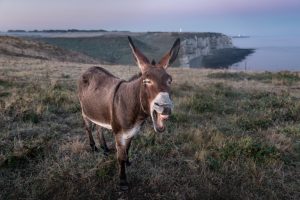 At this point, Balaam sees the angel and falls on his face out of fear. God says to him, “I have come here to oppose you because your path is a reckless one . . .”[4]

This is one of the weirdest stories in the Bible, but it seems to have some pretty clear lessons:

One: It’s wrong to curse peaceful people (or the equivalent actions).

Two: Even if you are a prophet of God, or think you are, you can be tempted by money and power to do stupid things like cursing peaceful people (or the equivalent actions).

Three: If you do this, you will probably make up all sorts of convincing stories about why God approves of your little adventure.

Four: You are embarking on a reckless path, and God will send “angels” to warn you about this.

Five: Nature and people and things you consider much dumber than you will also warn you, and you will probably get mad about it.

Six: Listen to asses. I’m not talking about foolish, mean people. Those are bastards. I mean listen to animals. Listen to nature. Listen to people without power trying to warn you of the bad stuff happening.

Why All This Matters

It is easy for us to think that God is on our side or that we are the voice of God. The story of Balaam’s ass suggests that we are prone to error in such judgements, and that it is wise to listen to the vulnerable in this matter.

Note: This article is on the more critical and pessimistic side. It is sometimes necessary to write that kind of post. But hopeful posts are also important. You can read some posts like that here, here, and here.

2 thoughts on “About Balaam and His Ass”